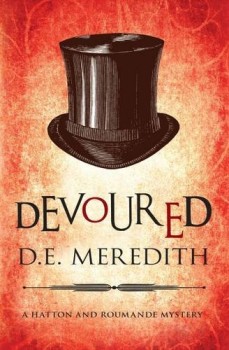 London 1856. The body of Lady Bessingham, a supporter of exploration and science, is discovered in her home. Inspector Adams, with the help of Professor Hatton and his morgue assistant Albert Roumande, uncover a grotesque world lying just beneath the veneer of civilised society.

London 1856. Science is threatening the deeply-held religious beliefs that are considered the bedrock of civilised society. Excursions to exotic and far-flung places, sponsored by the rich and powerful, are providing evidence of evolution that will soon call into question the very fabric of belief. But on one such excursion, evidence of something much more base and sinister is brought to light, and the sponsor – the controversial Lady Bessingham – is found dead in her home, her maid and some letters missing.

Inspector Adams of Scotland Yard begins the investigation but within a day the body count starts to rise and another collector is found dead. He looks to Professor Adolphus Hatton, the pathologist at St Bart’s Hospital, and his assistant, Albert Roumande, for assistance, but finds himself both helped and hindered by them in equal measure. They are desperate to push forward their own science, forensics, at a time when some still consider the cutting up of bodies to be blasphemy and the chemical tests of dead tissue as voodoo.

Hampered by his inability to link the victims, and plagued by the rising number of young girls who are turning up beaten to death in the city, Adams finds himself not only hunting for a brutal killer but also struggling to keep his own secrets hidden.

With Devoured, D.E. Meredith constructs a tightly-tangled web of mystery and deception. Only when the untangling begins and the lies are uncovered does her masterful handling of each thread shine through and in that respect this is a perfectly-paced thriller, constantly challenging the reader to rethink their loyalties. That is what kept me turning the pages.

Unfortunately, while the potential villains are all fascinating and multi-layered, it’s in Meredith’s hero characters where the book falls down. Set in Victorian London and written in the Victorian style, the friendship that presumably exists between Hatton and Roumande lacks any connection that feels believable or substantial. There was surely no less complexity in human relationships back in Victorian times as there is now but very little of that complexity makes it to the page and that’s disappointing given the beautifully-drawn plot. I was left feeling as if I’d skim-read sections of the book and was missing the substance of the partnership at the heart of it. But if you like Victorian crime, you’ll probably love it.