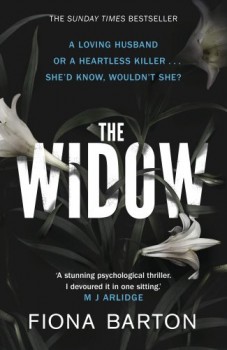 Jean is newly widowed. Her husband, killed in a traffic accident, had been the object of an investigation into child kidnapping. His death leads to a resurgence in press and police interest and a renewed investigation ensues.

A two-year-old child was abducted from her garden in 2006. In 2010, a man, who was investigated for the crime, is killed when he accidentally steps in front of a bus. This accident provides the impetus for renewed press interest and for the police to re-energise their investigation.

Fiona Barton handles the story in an interesting manner. Jean, the widow of the title, writes in the first person narrative, giving the reader a direct and developing insight into her troubled relationship with her ex-husband, and the impact his personality has had on her life and other relationships. This perspective is off set by other sections of the narrative being told in the third person, via the actions of the detective, who had unsuccessfully investigated the crime, and the journalist, who is desperate for an exclusive story from the widow.

The characters and their worlds are well developed. The widow, in her apparent suburban isolation, had aspirations and ideals that have been shattered and which now risk her future existence. The world of the journalist is fascinating, the scope she is given to get an exclusive story and the strategies she uses to manipulate her target are extremely well described. The police action appears clumsy, and blocked by protocol and bureaucracy, despite the honesty and integrity of the investigating detective. Also well described is the sad life of the mother of the abducted child, almost an irrelevance in the ensuing investigations.

Throughout the story is the strand of the underworld of child exploitation, secret Internet links and unpleasant men in shady places, which gives a sinister and uncomfortable context to the sequence of events. As the stories of the protagonists develop and different viewpoints become apparent, the reader’s sympathy shifts and eventually the resolution of the story is well handled.

This book is well written and skilfully crafted to believably interweave and juxtapose the worlds of apparent middle class security, poverty and underprivilege, press exploitation, police investigation, and networks of child exploitation.