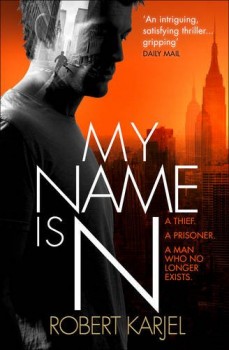 My Name Is N

Ernst Grip of the Swedish Security Police is summoned to the USA to interrogate a prisoner, accused of involvement in the terrorist attack. Then he meets the man called N.

Ernst Grip of the Swedish Security Police is summoned to New York. He doesn't know the reason but trusts his former boss and follows his request. Although he now works in personal protection for royalty which also includes looking after the Princess during her shopping trips, he travels from Sweden to meet the FBI agent Shauna Friedman.

This enigmatic and quietly powerful woman wants him to speak to one of their prisoners, suspected of being involved in a terror attack. Grip is taken on various military aircraft to “Diego Garcia: a remote location in the Indian Ocean, where the land barely rises out of the sea,” a place which unlike Guantanamo did not tolerate the world’s attention.

There he is shown the prisoner only known as N, kept in isolation for years, badly beaten, tortured, with long ragged hair and beard, a man who has not spoken for several months. The FBI and CIA demand that firstly Grip finds out if N is a Swede, and then makes him reveal all his secrets, implicate others, and crush him. Any method is acceptable.

Grip slowly starts to get the man’s wavering attention but as he goes through days of interrogation using his own humane methods (turning on the air conditioning, getting the man’s hair cut, giving him newspapers in various languages, and just talking) and conversations with Shauna which resemble a highly sophisticated cat-and-mouse game, he gets the feeling that he is also being interrogated.

His own mysteries might come to light and his frequent private trips to New York could become public. Does being in the same place at the same time years ago during the 2004 Tsunami in Thailand mean that both of them could be condemned to death? The dangerously mysterious thread binds Grip and N together and both men must learn to trust each other in hope that one of them stays alive – and they must attempt this while being watched, recorded and translated from Swedish.

My name is N by Robert Karjel, a lieutenant colonel in the Swedish Air Force and a helicopter pilot, is an intriguing thriller, set as far away from the Nordic Noir climate of snow, cold and gloom as possible, and not featuring a classic type of a moody police detective. Instead the oppressing heat and exotic locations around the world bring a different type of noir: where no one feels safe, yet become a pawn in a game of those with money, power and obsessions.

The English translation (by Nancy Pick and the author himself) cleverly conveys the feeling of paranoia, gripping action and clues splattered all over the story to deliver the most surprising conclusion. This captivating story of Grip will keep you wanting more and ponder at the intricacies of the art, guns, money and the will to live – or lack of it.