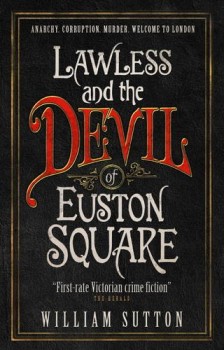 Lawless and the Devil of Euston Square

Scotsman Campbell Lawless has ambitions to be a Scotland Yard detective. His assignments soon lead him into a dark world which threatens the very future of the Empire.

Victorian London is the genre of the moment. It started with the dreadful TV adapation of Sherlock Holmes and expanded into a plethora of Conan Doyle-inspired spin-offs and imitators. William Sutton is the latest to join the throng – and he’s a welcome addition, blending social and political history with high society and royal scandal, peppering his cunningly constructed story with real figures and events and suspending it all in a mist of bafflement and gentle humour.

His hero is Campbell Lawless, a young, idealistic – at times almost naively so – Edinburgh Scot set on becoming a Scotland Yard detective. He’s no savant like Holmes, rather hard-working and dogged, mingling bafflement with sympathy.

The story covers the first three years of his career as he has much of the idealism knocked out of him by the realities of London life. Huge events like the introduction of proper sewerage, expansion of the railways and the first underground system clash with appalling poverty, disease and crime – and underlying it all is the constant threat that the underclass will follow the example of so many Continental countries and rise in revolt.

In the uncertainty following the death of Prince Albert and Queen Victoria’s virtual withdrawal from public life, there is little to anchor the Empire on which the sun never sets. The heir apparent, later Edward VII, is a feckless youth, obsessed with chasing showgirls, gambling and drink. When he targets a particular actress, he attracts the hatred of a brilliant, but unstable social reformer.

Lawless’ superior, the dour Inspector Wardle, is the man charged with keeping Prince Bertie out of the public eye. A convinced royalist, he knows he is coming to the end of his time and is prepared to sacrifice justice for expediency as he imparts the wisdom of his hard-earned experience to his protégé in his own way.

Amid the pomp and ceremony, Lawless must deal with what are familiar problems in this century. Gangs, blackmail, political corruption, exploitation of the poor are hardly new, but Sutton manages to add a few nasty Victorian twists.

But it is the changing London itself and its people which really grab the attention. The street gangs – his Worms are more than a nod to Doyle’s Baker Street Irregulars and their irrepressible leader a tribute to Cockney ingenuity and precociousness – and their strange argot of rhyming slang, cant, backslang and lingua franca play a key part in what is a believable and carefully built story.

The plot is intricate, if at times a little jumbled, largely due to the structure of the story. It is related in quotes from a local newspaper, Lawless’ own accounts, those of Ruth Villiers an ambitious and very modern young librarian with her own interest in the floundering detective, and it takes time to come to terms with the various branches.

In the end, Lawless manages to draw them all together in a spectacularly violent conclusion, but still leaves enough questions unanswered to whet the readers’ appetite for more. Through the whole story a veritable who’s who of Victorian figures, from politicians to social reformers to authors, make cameo appearances to lend a background reality to what is a clever and satisfying first novel.