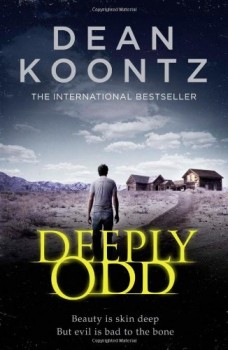 Odd Thomas chases a pantechnicon to a Satanist cult to try to save a group of children.  On the way he meets a formidable old woman whose contacts help Odd in his quest.

Odd Thomas is now staying in the town of Magic Beach with the still-pregnant Annamaria, the two dogs (one live and one a ghost) and a young boy who they rescued in a previous adventure.  On a routine shopping expedition, Odd encounters a decorated pantechnicon that activates his special sense for evil.  He follows it to a supermarket, where the driver tries to kill him and Odd becomes aware of impending danger to three children before the driver escapes him.

Following the truck, Odd encounters the enigmatic and resourceful Mrs Edie Fischer, an elderly woman who drives a stretch limousine at breakneck speed and seems to have a network of helpful friends everywhere. At a truck stop, Odd becomes aware that he has entered an alternate reality and he is helped back to the real world by the film director, Alfred Hitchcock, the first time a spirit has spoken to him. After many difficulties and help from more of Mrs Fischer’s friends, Odd uncovers a conspiracy much bigger and more dangerous than he could have anticipated. Can he survive and save the children?

Odd Thomas is a likeable, if sometimes annoying hero. He is completely unconvinced of his own heroism, merely doing what he believes he has to do. He does, however, show an extreme level of determination to complete his tasks, at the risk of his own life if necessary. As the bigger story progresses over the series of novels, he is developing a greater understanding of the strange world he lives in and the events surrounding him. His introspective nature provides a perfect vehicle for the author’s speculations about the nature of reality and the supernatural world.

I will be very surprised if this is Mrs Fischer’s only appearance in the books. Her extensive contacts and her ability to offer sage advice whenever it is needed are far too useful for her to disappear from Odd’s life.

In the course of his travels, he meets several people living ‘off the grid’ – as far as possible independent of the rest of society. In the over-crowded islands of Britain, it is difficult to imagine the isolation needed to achieve this sort of lifestyle as they all seem to be located many miles from the nearest road, let alone the nearest town.

My fondness for Odd Thomas continues to grow and I’m looking forward to the next story in the series.