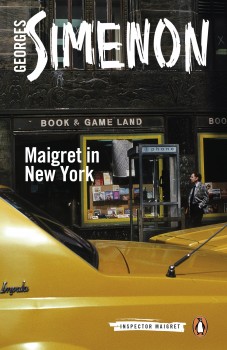 Maigret agrees to a request from a young Paris lawyer, fearful for his father’s life, to sail to New York and find out what is happening to him.

A young Parisian law student, Jean Maura, comes to Maigret with a strange request. He tells him that his father, who lives in New York, writes to him regularly and affectionately. The tone of his recent letters, however, has changed and they now give the impression of someone who thinks of himself as in danger.

Maigret is now retired and quite prepared to enjoy the style of life that retirement brings, but he sees that the young man has reason for his concern and decides to help. However, as soon as the ship docks in New York, Jean Maura disappears and Maigret has to begin the investigation without him.

Paris and its unique atmosphere are part of nearly every Maigret novel and this one is very unusual in being set entirely in New York. It says a great deal for the quality of Simenon’s writing that he is able to provide a picture of the city that is almost as authentic as that of Paris.

There are little incidents that cause Maigret to think about the differences between the two cities. On the bustling quayside porters barge into him, as they might perhaps in a French port, but in New York there is no apology. The bell-hops annoy him by being so blatant in their expectation of a tip, even going so far on one occasion as to get him out of his bath. The vibrancy of New York life is excellently brought out as Maigret walks and journeys by metro and cab into different parts of the city. His enquiries lead him from the poorer immigrant quarters to Brooklyn and Times Square and into Greenwich Village, where housing is on a smaller scale and reminds him of suburban Paris.

The other big difference Maigret notices is in the way that the law is enforced. O’Brien, an FBI man, helps him with his enquiries but is careful to point out that there are limits to what he can do on account of the greater respect for individual liberty to be found in the United States. He makes this point with a degree of irony but Maigret still finds it offensive to take a lecture on liberty from the New World.

The fact that Maigret has no official recognition in the United States inevitably shapes the plot, since there is virtually no enquiry he can make on his own authority. Those forays that he makes so frequently in his own country to the scene of the crime and the interviews connected with it simply cannot apply in New York. He still makes an effort, of course, and we have a description of him tramping up all the floors of a rooming house, seeking information from the occupants, and finding precisely nothing.

However, it isn’t simply the change of environment and the lack of official authority that makes for a weaker plot than usual in these Maigret novels. One thing above all that stands out as a flaw is the fact that, in spite of possessing only schoolboy English, he rarely finds any difficulty in understanding or being understood. This is not to mention the inevitable difference between the language he was taught and that which he hears in ‘Noo York’ - something with which Simenon might not even have been familiar.

The plot is usually a strength in Maigret novels, but here we are presented with too much that is unlikely. Why, for example, should he deduce anything from a line of French that is spoken to him by a drunken stranger in a bar? And why should that man turn out to have an important part in the story? Furthermore, the dénouement, in which Maigret solves the case via a long transatlantic telephone conversation, appears forced and lacks the normal excitement as he attempts, rather laboriously, to explain what he is hearing to his listeners. We have no difficulty in believing in the crime passionelle – a concept well established not only in Simenon’s work but also in French literature as a whole. However, when it is taken out of that context and applied to the New World it doesn’t carry quite the same conviction.