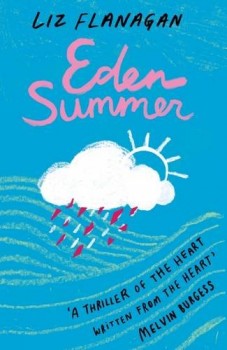 Jess Mayfield’s best friend has gone missing, and no one knows why, but Jess is determined to find Eden.

Jess Mayfield is an ordinary teenager. OK, she has to put up with some bullying because her mother is in a relationship with a woman, but that’s not the defining point of her life. More important to her is her friendship with Eden Holby, but when Eden goes missing, Jess’ world starts to fall apart. Jess has to find Eden or she doesn’t know how she’ll be able to carry on.

As Jess does her best to dig into the circumstances surrounding Eden’s disappearance, she begins to question everyone close to her and close to Eden. There’s Liam Caffrey, Eden’s boyfriend, someone for whom Jess is trying to suppress her own attraction, as there’s no way she’s poaching her best friend’s boyfriend. There’s also Josh Clarkson, Eden’s ex-boyfriend. There’s no love lost between the two boys and it’s clear that violence is brewing only just under the surface as tensions start to rise in the small West Yorkshire down on the edge of the moors.

Eden Summer is a penetrating look into the sometimes murky depths of teenage friendships, where nothing is simple, and loyalties and affections can be turned on and off all too easily. Jess is an engaging narrator who keeps the story moving seamlessly on during its switches between past and present, as she tries to make sense of the events leading up to the point when Eden vanished.

Much of the story is tied up in the complexities of Eden’s relationship with her sister, who died in a car crash the year before. Jess knows she has to untangle the complicated mix of love and hate that had grown up between the two girls and she becomes certain that holds the key to learning what has happened to Eden.

Jess is strong and determined, loyal but also capable of seeing Eden’s faults. This is not in any way a predictable book, and that’s one of its great strengths. This is a very compelling young adult debut from Liz Flanagan. Her writing is fluid and Jess’ voice never wavers from that of an authentic teenager. Eden Summer delves deep into the nature of love, friendship and loss as Jess searches for the answers that might help save her friend.