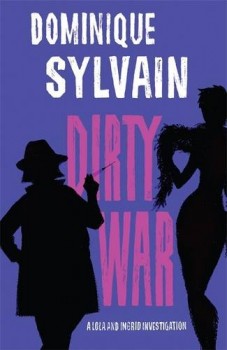 An up and coming Parisian lawyer is found murdered - burned alive next to a swimming pool in Paris. Lola Jost, whose assistant was murdered in a similar fashion, feels she has to see if there is any link between the two deaths.

This is the second outing for a most unlikely pair of private investigators – Lola Jost, a retired police commissioner, and Ingrid Diesel, a young and attractive masseuse and part-time striptease artist in a local night club.

An up and coming Parisian lawyer is found murdered - burned alive next to a swimming pool in Paris. Lola might be retired, but when she finds out the manner in which the young lawyer had been murdered, she is instantly curious and begins to pursue her own investigation.

The reason for this is that, a few years before she retired, her assistant Toussaint Kidjo, had been killed in the same way – something she had never forgotten. She had tried desperately to find his killer but without success and sees this as a possible opportunity to redeem herself. She receives help from a former officer, Barthélemy, who still thinks of her as ‘the boss’ and who is aware how important the case was to her.

It is not that she doesn’t trust the police. She knows Commandant Sacha Duguin of the Brigade Criminelle and trusts him to make a thorough investigation of the case.  He is assisted by Emmanuelle Carle and Sebastien Ménard. Carle might have expected to get the job of commandant herself and Sacha is constantly aware of her silent resentment. Ménard.is a young, ambitious man out to impress, frequently offering unrequested opinions on the case.

However, although each is sometimes more of a hindrance than a help, Sacha does his best to treat them as colleagues and manages to use them effectively. In fact, so well does he conduct the case that the reader finds it difficult to see why Lola and Ingrid are there at all and what exactly they contribute. Ingrid in particular seems to have no useful function and her brief abduction seems to serve no purpose other than to add a little spurious excitement to the plot – not that it needs any further complication.

Initially, we are told that the young man who was murdered, Florian Vidal, worked closely with a well-known lawyer who had made a fortune from representing people involved in the arms trade with African countries. However, the plot becomes more of a whodunit, particularly when other people are murdered.

One of the difficulties with this book is the large number of characters introduced and if it has to be set aside for some reason it is not easy to remember who these people are. As the story line becomes more complicated, so the need to refer back becomes greater. There are long conversations between Lola and Sacha which are supposed to keep both of them up to date with developments in the case, but it is impossible to avoid the conclusion that they are there to keep the reader up to date as the action becomes more and more labyrinthine. Eventually, we are presented with a wholly surprising development, which throws an entirely different light on what is and has been happening. The problem is that it is extremely difficult to accept this as a solution.

A particularly annoying habit during the latter stages of the book is the author’s use of italics to quote verbatim from previous conversations – this in an attempt to substantiate what we are now being told is the truth. However, there never was any reason to believe that they held any particularly significant meaning at the time and this tactic becomes rather tedious.

Finally, the ending of the novel is confusing and we are left wondering precisely what the last few pages were trying to communicate. Is the Lola/Ingrid partnership at an end? It seems to be so but we have the feeling we can’t actually believe it. Certainly if it turns out that the two intrepid females are to conduct another investigation one can only hope that it is in the context of a more convincing tale.