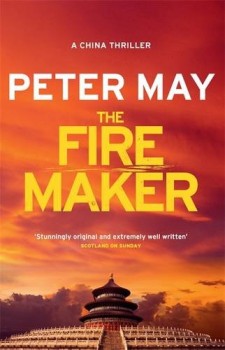 Forensic pathologist Margaret Campbell makes a visit to Beijing to give a series of lectures, but is soon involved in a live police case when a man is set alight in a local park.

Forensic pathologist Margaret Campbell is visiting China to escape pressures at home rather than to explore pastures new, and finds the differences from her native Chicago eye-opening. Her expertise, however, translates without difficulty, and when a man is found doused with petrol and set alight, she is asked to help. Her insights help to make progress with the investigation, led by young Deputy Section Chief Li of the Beijing CID.

Two further bodies are found in short order, with nothing to connect them to the first other than having the hallmarks of a professional hit, and the Marlboro cigarette stubs left at the scene. Campbell and Li work together to uncover a motive, and after an uneasy start become close, despite local censure.

Campbell’s initiative produces results in the form of evidence as to the man directly responsible for the deaths, and although the reason and the person(s) ultimately behind the crimes remain concealed, it becomes clear that some powerful people are involved. Li’s family and friends are threatened, and the pair end up on the run to gain the time to expose the criminals.

The Fire Maker is the first of six China thrillers set and first published at the end of the 1990s. An introduction by the author explains how he came to be fascinated by China, and much of his enthusiasm is reflected in the novel by digressions into Chinese culture and history. None of these are of such depth or length as to be irksome; Campbell arrives appallingly ignorant and her awakening provides a suitable excuse for a modest amount of background briefing.

Beijing at the time provides an interesting setting. In the early 1980s Beijing was little changed from the shape established over millennia, a pattern unresponsive to market forces and with no buildings above three stories. Today it is a forest of high rises; in 1999 vast swathes of traditional houses were being torn aside to achieve the transformation. Something of this comes across as a backdrop, although nothing is said about the social dislocation which accompanied the change.

May’s story hangs together; it is only the sheer pace which feels a little unreal. Campbell arrives severely jet-lagged and culture-shocked, conducts several autopsies, meets a guy who she dislikes on sight and then falls in love with, saves the life of a cyclist after an accident, and makes substantial inroads into a major conspiracy, all within the first 48 hours. With rare short breaks in the action for a romantic interlude, there is hardly a dull moment.

The mainspring of the conspiracy driving events is touched upon in the first few pages. Sufficient hints are dropped that the reader already has an inkling when the truth is revealed – a very 1990s concern but none the less frightening for that.