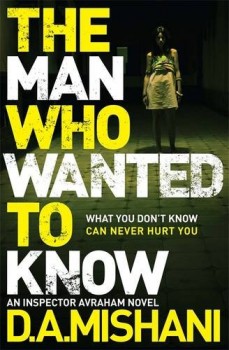 The Man Who Wanted To Know

A woman murdered in her own flat is known to the attending detective as a rape victim from some years previously. Could there be any connection?

Israeli Police Superintendent Avraham Avraham has new responsibilities when his boss Ilana is taken sick, and his first case is a murder. He recognises the dead woman, Yeger, as the victim in a rape case, for which a man was convicted and imprisoned. The man is still behind bars, but his friends might have had a motive. Yeger’s son is being less than truthful about his contact with his mother, which also seems suspicious.

A neighbour claims that a policeman visited Yeger’s flat at around the time of death. Avraham is keen to pursue this, but warned by his superiors to avoid any publicity, however helpful it might be to the inquiry, in case it should tarnish trust in the police. In parallel chapters we hear of a woman, Mali, and her concerns about her partner Kobi, who is acting strangely. The two stories are drawn together but end in a twist.

This is the third outing for Avraham, unsettled by his greater responsibilities and tempted to seek counsel with his sick boss, who is in no fit state to give advice. Avraham has recently been joined by Marianka, who he met overseas, and his inability to confide his worries in his partner is complicating their relationship. It is not helped by Marianka’s parents, who are visiting and making no secret of their view that their daughter would be better off leaving Avraham and returning to Europe.

As with previous books in the series, Avraham’s progress is documented by both facts and by comments reflecting his mental state: his insights, his confusions, omissions and failures, and his feelings about the case. All gives the reader an intimacy with the protagonist, and it is easy to sympathise with Marianka when she tells him: “You take responsibility for my decisions...and then blame yourself.”

From time to time the author stands back and views events with the benefit of hindsight, commenting that this is the last occasion for some hitherto common gathering, or that things could have happened differently but for chance. Sometimes this kind of thing can be irritating, but the way Mishani does it gives a philosophical underpinning which underlines the tragedy involved.

As in Avraham’s previous appearances, the story again has at its focus woman and children. Mishani provides a profound insight into Mali, a woman who knows more about her partner than she can admit to herself, who knows that she has to take action but finds reasons to put off the inevitable. The convincing portraits of both victim and protagonist lift the story out of the normal run of police procedurals.