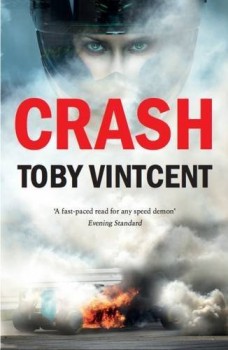 Crash sees the return of the characters Toby Vintcent established so well in his first F1 thriller, Driven. Remy Sabatino, Formula 1’s first female driver, is in Moscow for the newly established Grand Prix. She arrives to more fanfare than expected as Moscow’s mayor, Oksana Pavlova, is determined to make political capital out of the glamour and prestige that surrounds the sport, while taking a more libertarian stance that Russia is used to, post-Putin.

Sabatino makes an effective poster girl for equality, but the gloss is soon tarnished when she’s involved in a devastating crash during the race and 27 spectators are killed. The finger of blame points immediately to Sabatino for having made a risky move on the circuit. Her detractors are quick to point out a recent incident between her and her teammate, the Russian driver Yegor Baryshnikov, for which Sabatino was penalised by a World Motor Sport Council enquiry.

The Ptarmigan team finds itself facing a charge of corporate manslaughter and its principal Tahm Nazar is publically arrested and thrown into jail. Team owner, the super-rich Dominic Quartano, promptly dispatches his head of corporate intelligence, former Royal Marine Colonel Matt Straker to Moscow to investigate, but he’s thwarted at every turn by the Russian prosecutor who has both Tahm and Sabatino firmly in his sights. The Ptarmigan team are denied access to the site of the crash and have nothing more to rely on than the telemetry from the car and Sabatino’s memory of the lead-up to the crash.

Vintcent makes good use of his F1 knowledge to provide a believable backdrop that positively exudes authenticity. I’ve followed the thrills and spills of the sport for about 20 years, and there are times when I had to do a quick double-take, reminding myself that Ptarmigan and their arch-rivals Masserella aren’t in the running for the current championship, especially as I was writing this review against the backdrop of a wet race at Silverstone, with Lewis Hamilton cruising ahead while Nico Rosberg and Max Vestappen slugged it out behind him.

For me, F1 has always been as much about the inter-team politics, the back-biting and rivalry between the drivers as the on-track action which, recently at least, has been hard to come by, although the current season is being somewhat enlivened by the wheel to wheel spats between Hamilton and Rosberg. This is the atmosphere that Vintcent effortlessly conjured up. The races unfold before your eyes, as easy to follow and as slick as the best commentaries, but there is never an overload of teccie details, and Vintcent is a master of the art of avoiding info-dumps, even when he’s explaining the technical workings of the cars and the systems that keep them running.

He’s equally as fascinating when he delves into the murky world of Russian politics and organised crime. On top of all that, Matt Straker is a good lead character. He’s tough, resourceful and knows how to get the job done. We see less of Remy Sabatino in this book as she spends most of her time in hospital, but she hasn’t lost any of the inner steel we’ve seen from her before.

Vintcent captures both the intrigue and glamour of the hype surrounding the sport. His drivers and his circuits feel real, as does the world he surrounds them with. And Crash plays to one of my favourite tropes, with the good guys facing seemingly insurmountable odds against opponents that have no concept whatsoever of playing fair. Crash is a sleek, intelligent thriller that never flags, whether you like motor-racing or not.