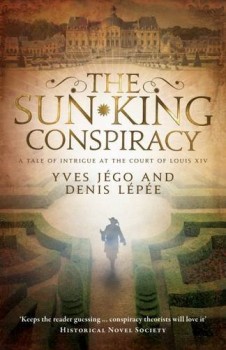 by Yves Jégo and Denis Lepée (translated by Sue Dyson)

It’s 1661 and King Louis XIV of France is 23. His First Minister, Cardinal Mazarin, is close to death and Louis’ personal reign is about to begin. With Mazarin’s health in terminal decline the carrion crows have already started to circle, getting ready for what they see as rich pickings in the inevitable power struggle that will follow the death of the man who has been the de facto ruler of France for the past 19 years.

Amidst the vicious political in-fighting in the palaces and salons of Paris, a shadowy organisation is determined to find the key to an ancient secret that could have far-reaching ramifications for belief in the divine right of kings to rule. The turmoil in England following the regicide of King Charles I has proved that no throne is wholly secure.

By accident, a leather document case stolen from Mazarin’s palace comes into the possession of aspiring actor, Gabriel de Pontbriand. The discovery of his father’s signature on one of the coded papers drags Gabriel into the heart of a dangerous conspiracy and threatens both his life and the career he hopes to pursue.

Gallic Books have chosen a good time to bring out this complex tale of mystery, intrigue and downright skulduggery in the French Court. The BBC is currently showing their period bonkbuster, Versailles, and The Musketeers, their stylish and entertaining sword-and-leather version of Dumas’ classic is just coming to an end. The Sun King Conspiracy is set almost mid-way between these two dramas, and captures much of the verve and style of the French court in a time of great transition.

Historical figures are out in force, with Minister of Finances, Jean-Baptiste Colbert locked in a bitter struggle for supremacy with Superintendent Nicolas Fouquet. Playwright Molière is caught in the middle of the two men’s scheming, dragging his young protégé Gabriel even further into the mire. Louise de La Vallière, soon to become the King’s mistress, also makes an appearance, managing to prove yet again that it seems to be impossible to depict her as anything other than insipid and faintly irritating, something that has dogged all her incarnations in fiction from Dumas onwards. But as she kept Louis entertained for several years and bore him six children, I can’t help feeling that no one has yet managed to do her justice!

Authors Yves Jégo and Denis Lepée have heavily laced their fascinating historical romp with elements of a conspiracy thriller and mixed the two to produce a lively result that brings a complex period of history vividly to life. If you’ve enjoyed either of the BBC’s current forays into the French court, The Sun King Conspiracy is one for you.