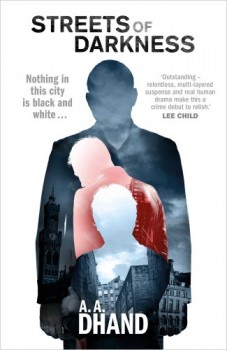 DI Harry Virdee has been suspended from duty, but he goes solo to track down the killer of a Bradford VIP.

Luther meets The Wire, claims the publicity blurb. Yeah, well, maybe. Whichever way you look at this debut outing for DI Harry Virdee, the Bradford Tourist Board won’t be rushed off their feet.

It’s most definitely grim oop norf, as racial unrest threatens to rock the city, and disgraced cop Harry goes it alone to find out who has bumped off a VIP and whether former convict Lucas Dwight is responsible.

Streets of Darkness is a memorable debut from AA Dhand. There are rough edges for sure, and it’s a touch heavy on genre tropes (maverick hero, tangled private life, dodgy colleagues …) But it’s one of the bleakest books I’ve read in ages with some scenes you’ll be reading through your fingers. I’d think twice about taking a taxi in Bradford after this…

Harry is one of those rare characters in UK crime fiction – of Asian parentage, and a Sikh married to a Muslim women. As a result, both are estranged from their families. I liked Saima a lot – she has bags of spirit and also has the measure of her husband and his anger management issues.

Bradford itself is probably vying for the position of lead character in the book. As a character comments, the city could lose the lottery jackpot, even if it held all the tickets.

Streets of Darkness is heavy on Americanisms – I thought British cops showed warrant cards and not badges, for a start. And the first thing Harry would have handed over when he was suspended was his card – which would have severely curtailed a lot of his gallivanting around!

But it’s a cracking debut which moves at break-neck speed and has one hell of a twist at the end. And it’s got TV adaptation material written all over it in neon letters – it’ll be as creepy as hell if they borrow the 40w light bulb from French cop dramas. Some of the scenes in the book make Luther look like Beatrix Potter.