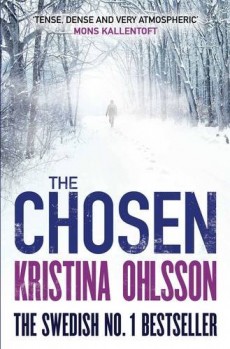 The terrifying Paper Boy arrives at night, carefully chooses his victims, mostly children, and disappears. Later the mutilated bodies are found with paper bags on their heads. Fredrika Bergman and Alex Recht have to stop him from claiming more lives.

On a cold January day, a teacher is shot outside a Jewish school within the Solomon Community. Parents and teachers are in shock. Few hours later two ten-year-old friends, Simon and Abraham, are abducted on their way to a tennis lesson. People search frantically for the missing boys but their efforts are thwarted by the heavy snowstorm, covering any potential tracks of the perpetrator. The following day, the boys are found lying in the deep snow, barefoot and shot dead. Disturbingly, their heads are covered by paper bags, with crude faces drawn on.

One of those involved in search is Peder, in his official capacity as a head of security at the Solomon Community, recently appointed by the enigmatic Efraim Kiel who has travelled from Jerusalem. Peder’s previous experience as a police officer puts him in an impossible position: he wants to be part of the investigation but has to remain neutral. Yet his thinking influences his former colleagues, the investigative analyst Fredrika Bergman and the DCI Alex Recht who pursue different leads varying from a hate crime to the organised crime.

These two are faced with a tough challenge of hunting a merciless killer. Fredrika and Alex stumble upon the traces of the strange Paper Boy. He comes alive at night, takes his victims, mostly children, and then vanishes. The old Israeli urban legend seems to be known only to some people, but including the parents of Simon and Abraham. They emigrated from Israel to Sweden ten years earlier to escape conflict, and clam up when asked about their previous life. But the infamous Paper Boy might be a serious lead …

Meanwhile, Kiel remains in Stockholm, after his mission of appointing Peder, and conducts his own investigation. His undercover presence in town is unsettling, as it appears that he is also followed by the Paper Boy, leaving Hebrew messages in his hotel, as well as by Eden Lundell of the Swedish Security Service, whom Kiel tried to recruit to Mosad, by seducing and humiliating her years earlier.

Although all main characters seem to be parts of a very complicated puzzle, the novel is much clearer than this summary – and definitely worth pursuing!

Kristina Ohlsson, a political scientist and counter-terrorism expert, draws from her own experience and knowledge of the Middle East conflict.  She takes the reader on the uncomfortable but thrilling journey from the seemingly peaceful Sweden to the volatile Israel where no one is safe. She builds up the suspense from the very first chapter. The shocking and dramatic ending is completely unpredictable, but it makes perfect sense as the story has been unfolding, and switching between past and present.

The Chosen is a powerful thriller, brimming with international menace which threatens the superficial peacefulness of snowy Sweden. The narration brings recollections from previous books in the series, creating a very interesting backdrop for the current story in which the strongly portrayed protagonists race against time and the killer.