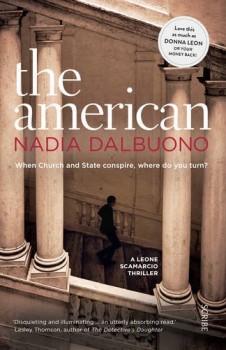 A body is found hanging under the Ponte Sant’Angelo. Who is he and why are there similarities to the death of Roberto Calvi all those years ago? Inspector Scamarcio has his work cut out to solve this one.

A body is found hanging under the Ponte Sant’Angelo with handfuls of rubble in the pockets. This is one of the similarities it has with the body of the banker Roberto Calvi found hanging in similar circumstances in London some years previously. Soon after this a Vatican banker, Cardinal Abbiati, is found stabbed in his apartment in the Vatican.

Inspector  Scamarcio takes up the case and soon finds himself threatened by some heavies, apparently from America. Caught between his unfortunate links with his father’s past life and a difficult romantic attachment, he tries to find out more about the two apparent murders by making contact with various media friends.

This book delves deep into the world of Italian politics and is a reminder of the way in which the Church and State have always been intertwined in this country and also linked to international politics. It also highlights the potential role of the criminal underworld in Italian life. Sometimes the technical aspects of all this become rather complicated for those from outside the country.

There is certainly plenty of food for thought in that some of the theories put forward for acts of terrorism around the world over the years, for example, are unconventional at the very least, if not fanciful. However, the way in which the book is written makes these theories appear highly believable. At times the discussion of the politics and procedures gets in the way of the on-going story, but as the book develops so the balance between these aspects evens out and things become fast moving and absorbing.

For those who know Italy well it is refreshing to have such accurate descriptions of the various locations in which Inspector Scamarcio finds himself.  The streets of Milan, for example, and the area around Varese feel absolutely realistic. The descriptions of Scamarcio’s modern apartment as opposed to a lock-up where criminals do bad things are very convincing.

The choice of words fits the action, so for example when Scamarcio wakes to find an intruder in his room he hears tape being rolled and snapped before being stuck over his mouth; the corridor was quiet apart from the dull hum of a Coke machine; earlier when he was trying to control his rage “he counted silently and tried to focus on a patch of ground beyond the river where a shabby cluster of starlings were picking at breadcrumbs.” The words give a clear window onto the characters’ feelings.

It makes a difference that despite the author’s name this is not a translation. The prose is fluent and a joy to read, and the book as a whole is both challenging and enjoyable.