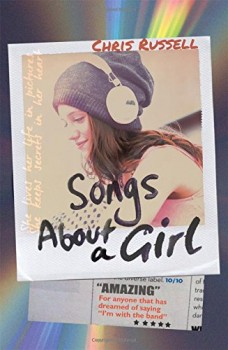 Songs About A Girl

Fifteen-year-old Charlie Bloom’s life is turned upside down when she’s asked to take a series of backstage photos of the latest boyband phenomenon, Fire&Lights.

Fifteen-year-old Charlie Bloom likes taking photos but never in her wildest dreams believed she’d be asked to take a series of candid, backstage photos of the latest boyband to top the charts worldwide, Fire&Lights. But when band member Olly Samson, who used to go to Charlie’s school, asks her to join them, Charlie can’t say no, even if it means telling lies and keeping secrets from her dad.

Charlie is propelled into an unfamiliar world of fame, fans and obsession, where every move she makes ends up being public property. This intensifies when a photo is leaked showing her alone on a darkened stage with lead singer and songwriter, Gabriel West. Then the spotlight is very firmly on Charlie.

As Charlie gets closer to the band, she realises that some of their music means more to her than anyone might think. Some of the lyrics echo words in a notebook that’s one of the only two things she has left from the mother she never knew who died when she was only three years old. The other is her mother’s woolly hat, which she wears every day, pulled down over her ears.

The more Charlie hears the gorgeous, enigmatic Gabriel West sing, the more she believes the songs are actually about her, but what she doesn’t know is how her mother came to write the same lyrics in her notebook more than a decade ago.

Songs About a Girl perfectly captures the intensity of band fan culture or ‘bandom’ as it’s known, where fans pore over every snippet of information about the band, dream about getting close to them and obsess over every love interest – real or imagined – that the object of their obsession might have. This is a book written from the perspective of someone who has been immersed in bandom and it’s a book that anyone who’s ever had a teenage crush will immediately relate to. To show my age, I was in love with the lead singer of The Monkees while my best friend at school was collecting every Beatles album she could get her hands on. Since then there’s been a seemingly endless procession of one boyband after another, with Westlife, Boyzone, One Direction and many others.

Charlie finds herself torn between clean-cut, boy-next-door type Olly Samson and the distinctly more moody charms of Gabriel West. They both want to get to know her better and Charlie wants to get to know them as well. But more importantly, she wants to know what the connection is between the songs the boys are singing and the words written in her mother’s notebook. Suffusing this story of teenage obsession, friendship and vicious online bullying is the haunting backdrop of an older song, Harry Chapin’s poignant, lyrical story of dysfunctional parenting, Cat’s In The Cradle. That song wasn’t something I’d expected to find in a contemporary YA novel, but it works beautifully in the context of a story about loss, secrets and growing up.

Writing about fictional celebrities while contriving to make them seem real is a hard trick to pull off, but Chris Russell’s YA debut succeeds where many others have failed. His own background as a musician and band member is much in evidence. Everything he writes about rings true. Fire&Lights have the unmistakeable stamp of authenticity and it’s clear that Russell still vividly remembers what it’s like to be both a teenager and a fan. This was a book that I just wanted to go on an on. The ending when it did come was clever, surprising and very, very intriguing. And the really good news is that Songs About a Girl is the first of a trilogy.