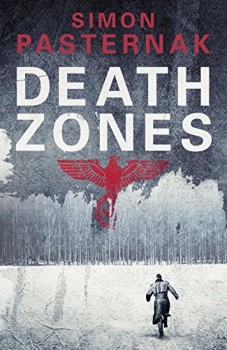 In Belorussia in July 1943, a few hundred miles west of the advancing Russians, a German general is killed by partisans. Oberleutnant Heinrich Hoffman is pressed to find the man responsible.

With the battle of Kursk putting the Wehrmacht on the defensive, life behind the German lines is becoming increasingly uncertain. It is open season on Jews, Bolsheviks, partisans, or anyone else Berlin deems suitable for elimination, but prospects look poor for the Germans also. It’s desperate times, with casual violence and death commonplace.

As the book opens, Oberleutenant Heinrich Hoffman is trying to find a way of reporting the murder of a Jew without offending either of two SS officers in dispute, but the case is put aside when General Steiner is found mutilated and murdered nearby. A child is the sole witness able to give a clue as to the culprit, a Jew with distinctive tattoos. Hoffman’s friend SS Hauptsturmfuhrer Manfred Schlosser insists that finding the man be made top priority.

Hoffman soon realises that Steiner’s death means more than is immediately evident. Steiner’s presence in the area at all, and with such a small escort, is odd. Schlosser’s preoccupation with the death, and that of the head of the local military, seem excessive. To understand the matter Hoffman is eventually led back to Germany, to Hamburg, where he finds the solution, but also the horror of war is brought to his own backyard.

In recent years a number of authors have been tempted to explore the literary possibilities of setting a police protagonist within the Nazi regime during WWII. Such an attempt presents a number of challenges. No small effort is required to understand and explain the complex of interlocking hierarchies which characterised the Nazi machine, and the minefield of inter-departmental jealousy and rivalry. Pasternak makes an excellent go at this, with a glossary for those struggling.

A further test is to make the protagonist human enough to retain readers’ sympathy, while making him believable, given the realities of time and place. Here the author is under some difficulty, given that the Nazis considered Slavs barely human even before the prospect arose of soon being overwhelmed by them. Hoffman, however unwilling, is thus obliged to participate in operations which turn the stomach.

Nevertheless, Pasternak does his best. Hoffman tries to save the child informant, and his thoughts show how cruelty disgusts him. Hoffman arrives in Hamburg on the night of the RAF-created firestorm of late July 1943, and whatever his sins the penance seems adequate, to say the least.

For its re-creation of the historical period, and for the big themes explored, this is a very impressive novel. It is more usual perhaps for novels of the period to give the protagonist abilities that enable him to combat the darkness with which he is surrounded, if only in a small way: a note of hope in a sea of inhumanity. Without that, the conclusion comes across as very bleak.