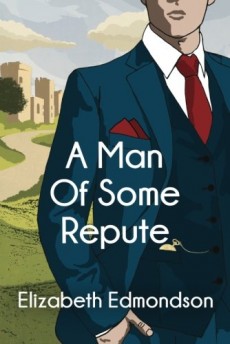 A Man of Some Repute

Hugo Hawksworth of the intelligence services is given a desk job following an injury sustained in the field. His boss arranges for him to be accommodated in Selchester Castle, from which Lord Selchester had mysteriously disappeared six years earlier.

The author’s note in A Man of Some Repute states that Elizabeth Edmondson is fascinated by events leading up to the Second World War and also by its aftermath, including the Cold War. Thus her novels are set in the 1930s, 1940s and 1950s, this one beginning in 1953.

We find ourselves in the company of Hugo Hawksworth, who is driving with his 13-year-old sister, Georgia, to Selchester, where he is to take up a new post. We learn from their conversation that he is in intelligence and it seems that he is being moved to a desk job, having been injured whilst in the field. Sir Bernard, his boss, has arranged for him to live in Selchester Castle, which has only one occupant, Freya Wryton, the niece of the late Lord Selchester, together with a few staff. The term 'late' is not strictly correct but since he had disappeared six years before in a blizzard and has not been heard of since, it is generally assumed that the earl is dead.

The novel soon becomes very much a country house whodunit, though the country house in this case is replaced by an ancient castle. There had been six people present in the castle on the night of Lord Selchester's disappearance, all of whom told exactly the same story - that he had left his guests to go to his study and had not returned. The police had stated that there was no suspicion of foul play.

However, a discovery made in the Old Chapel soon after Hugo's arrival leads to an entirely different conclusion. When it turns out that there was, in fact, a possibility that the missing man had been murdered, the police are obliged to think again. However, they seem disinclined to pursue a proper investigation and Hugo, suspecting some kind of cover-up, decides to look into the case himself. As the story of the night of the disappearance unfolds, people who appeared to be totally innocent are found to have things to hide and the missing Lord Selchester is also seen in a different light. The ending is a little contrived, particularly when Freya's horse takes an important part in the action, but on the whole the plot keeps the reader interested until the end.

The main characters are generally well drawn. Freya comes over as quite a 'modern' woman in a society where being modern is something relatively new. Sonia, the heir to the estate, is also very modern, though in her case it is the modernity associated with acquisitiveness. She cares nothing for the castle and its importance to the town and cannot wait until she is legally in a position to sell it and become very rich. Georgia, Hugo's sister, is obviously a detective in the making and has the curiosity and cheek not unusual in a 13-year-old. Mrs Partridge, the housekeeper, is a throwback to an age when being a senior domestic servant was not only a respectable but also a desirable position.

The setting and the period are both well conveyed and there is something very English about them, particularly in the (mainly harmless) gossip which seems to spread round the town at lightning speed. Perhaps it could be argued that in their easy acceptance of the importance of the castle and the superiority of the family that owns it, the townspeople belong more to the 1930s than the 1950s, but on the whole the community is convincingly described.

There is the hint of a suggestion at the end of the novel that we have not seen the last of Selchester and that the apparently budding romance between Hugo and Freya might eventually come to fruition. If so, and if it can be accommodated in an equally absorbing storyline, it should certainly be worth a read.