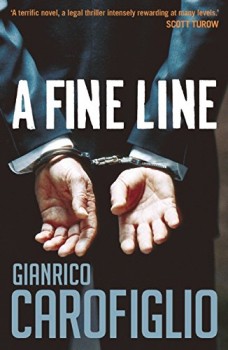 Guido Guerrieri is a defence lawyer working in Bari, southern Italy. Having just completed a successful appeal on behalf of a man accused of sexual assault, he receives a telephone call from a judge requesting his help.

This is Gianrico Carofiglio’s fifth novel featuring Italian lawyer Guido Guerrieri, following on from Temporary Perfections, published in 2011. He is now approaching 50, has experienced a cancer scare which turned out to be false and is in consequence very careful about what he eats and how much he drinks – a significant lifestyle change for a man who has always enjoyed both. He also lives alone in his apartment and there seems little likelihood that the situation will change.  However, circumstances do change according to events and something is to happen that will force him to rethink the kind of life he leads and to re-examine the principles upon which that life is based.

We find him, along with Consuelo, a partner in his law firm, cross-examining a woman who has brought a charge of sexual assault against his client. It is a fairly routine situation for a lawyer and we assume that the book is to consist of many such scenes. In fact, Guido spends very little time in the courtroom after this successful appeal and instead becomes involved in preparing a defence for a judge, Pierluigi Larocca, who suspects that he is going to be facing charges of financial corruption.

In order to find out more about what may lie behind this, Guido engages the services of Annapaola Doria, a former newspaper reporter, now turned private detective. We have, therefore, a scenario in which he is neither actively involved in court nor in looking into the possible corruption charges, this being mainly handled by Annapaola. This comparative inactivity leaves him a lot of time for contemplation and one of the subjects that occupies his mind is the position of a lawyer within the Italian judicial system.

There is a chapter in which he listens to a lecture on the system given by Larocca. It involves various legal topics, including the presumption of innocence, the representation by lawyers of defendants whom they know to be guilty and the ethical problems involved. This is a somewhat theoretical and not terribly interesting chapter, but, in addition to its relevance to what is to occur later, it serves to have Guido question himself about life.

He feels he is getting old – perhaps a little too old for the visits to the gym and his sparring in the boxing ring. He begins to find himself attracted to Annapaola and thinks more and more about her. Gradually, it becomes apparent that the essence of this novel consists in the thoughts of a man who is gradually becoming concerned with the things that are important to him and the changes he needs to make in his life to achieve them. However, this lack of conventional plot does not diminish the novel in any way. Those passages where Guido analyses his situation are not only insightful. They are also very funny, particularly when he is concerned with Annapaola, of whom he is becoming more and more fond, to say the least.

However, there is still a tale to be told and the reader is anxious to find out the truth or otherwise of the accusations made against Judge Larocca. When it finally does emerge we begin to understand just why so much has been made of the justice system and legal ethics. Whether this will be the end of the affair is unclear and it may be that it will be taken up in another novel. Certainly the reader would be very interested to learn what becomes of the relationship between Guido and Annapaola.