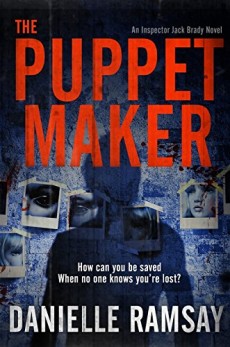 DI Jack Brady is under pressure from all sides to find a three-year-old girl who’s been abducted and track down a serial killer called The Joker.

Serial killer. Tick. In fact that’s a double tick here. A DI called Jack. Tick. I think it’s some sort of unwritten rule that if you have serial killers, your police hero has to be called Jack, but I’ll forgive Danielle Ramsay for that cliché as I do have a soft spot for DI Jack Brady.

Like all fictional coppers, he has his problems. He’s not good at relationships, either in his private life or in the job. He keeps a bottle of Scotch in his desk drawer and has few qualms about taking a swig during the day when the shit has really hit the fan, which it does pretty regularly in Brady’s life.

In The Puppet Maker, he’s being hounded by the press for allowing a man called James David Mackintosh to go free to abduct a three-year-old girl from the parents he’d just brutally murdered. In Brady’s defence, the DNA evidence that linked Mackintosh to the killer the press have dubbed The Joker didn’t come to light until after Brady had released him, but the newspapers aren’t going to let facts get in the way of a juicy story.

Brady is under pressure from all sides to find the girl and catch The Joker, but that’s easier said than done. His superiors believe Mackintosh has fled the area down to London, leaving Brady to plough a lone furrow in the north-east. But The Joker isn’t Brady’s only problem. His search for the abducted girl takes him to a deserted old mental asylum, where he finds not the girl he’s looking for, but also a terrified, brutalised woman, locked up with the bodies of numerous other women, all dressed like dolls, or puppets – hence the title.

Brady is put through the mill almost as brutally as the killer’s victims and, in a chilling climax, he’s faced with a choice as bleak as the Northumberland moors on a wet winter’s day. You’ll need a strong stomach for The Puppet Maker, or the ability to read through your fingers. And if serial killers are your bag, this is definitely one for you.