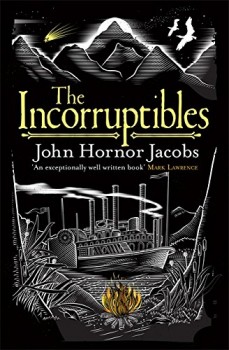 Army scouts Fisk and Shoe are assigned to guide a Senator on a hunting trip, but face supernatural as well as human enemies.

Take a classic Wild West story. Make its hero a cross between Rooster Coburn and The Man With No Name. Mmix with a tale about the dying days of the Roman Empire. Toss in a love story to rival any of the greats. Add more than a tribute to both Tolkien and Arthur C Clarke; season with a touch of Dante’s Inferno and a splash of Steven King’s horror.

Confused? You will be! But once you adjust to Jacobs’ world, where past and future blend with here and now, the natural with the supernatural, you won’t be able to put this compelling and amazing book down.

Fisk, son of a disgraced Roman senator and his dvergar dwarf partner Shoestring are scouts for the Imperial Roman Army in the Hardscrabble Territories, on the edge of the New World, assigned to a hunting party organised for the acting governor, an aristocrat with pro-consular imperium. Not only must they deal with some very unpleasant humans, they also face a constant threat from the vaettir, a sort of near immortal evil spirit.

The dwarf Shoe makes an engaging and credible narrator for a tale which will quickly suck you in. He and Fisk find themselves in a world where politics and greed go hand in hand, where daemonic alchemy and science tangle, where men live close to the land and death is always at hand.

It’s impossible to describe a plot which moves with such pace and so many twists. If there is a moral, it may be that love conquers all – or if you are of a more pessimistic nature, that if you unleash powers you do not understand, you will only find a road to destruction.

Even the subplots  – an out and out attack on state-organised religion and a grim warning about the dangers of technology highlighted by a nasty character who seems a cross between Doctor Strangelove and Joseph Mengele, are brilliantly handled.

Writers of fantasy need to constantly push the edges of credibility. Joseph goes far beyond that. My only unease with this gripping tour-de-force is the vaettir, who fulfil the role of Red Indians in a traditional cowboy story. Jacobs uses stereotypes propagated to dehumanise Native Americans, perpetuate the myth that ‘real people didn’t live in America until the Europeans arrived and settled an otherwise empty continent’, and justify their appalling treatment by the settlers. In a book written in the 21st century, I would expect better.