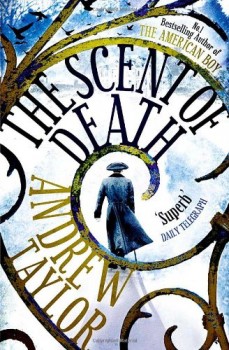 The Scent of Death

In 1778, New York is under siege by the armies of George Washington. Edward Savill has been sent by the English government’s American Department to resolve property issues among loyalists. He stumbles onto a murder, which sparks a trail of deceipt, corruption and lies.

Edward Savill, a middle-ranking but ambitious civil servant in the American Department of Lord North’s government. is sent to New York in 1778 to resolve property issues for loyalists who have suffered losses in the American fight for independence. He arrives in a city under siege from George Washington’s colonial army and almost immediately stumbles into a murder. The alleged killer is quickly discovered and hung. But have the British authorities got the right man?

Savill soon suspects the motives of many of those with whom he comes into contact. Who really is the man who befriended him on a sickness-ridden Atlantic voyage? What does the apparently successful businessman who takes him up really want? What secrets are the family with whom he is lodging trying to hide? Is the woman he comes to love – whose perfume gives the books its title – all she seems to be? As his mission is extended more than once, Savill is unwillingly dragged into a morass of greed, spying, corruption and murder, while at the same time facing a personal crisis which could end his own career.

Taylor has produced a number of successful crime series, psychological thrillers, the successful Roth trilogy – adapted into the drama Fallen Angel – and the historical novel The American Boy. He has plundered the Crime Writers’ Association awards list and is the only author to twice win the Ellis Peters Historical Award. But this time he may just have fallen short of his pedigree.

His historical background is superb. His description of life in a city under siege and the inequalities of the social strata of British rule in the colonies is first class. So too are period details of manners, dress and conduct in the late 18th century, which he brings to vibrant life with some clever and stylish writing. The plot is well thought out, deeply complex and provides an exciting climax on the ice of the frozen Hudson river.

All in all, this ought to have been another winner. But it isn’t. This story lacks pace. In fact, the build-up of tension is at times almost glacial, particularly in the middle section where it is all too easy to become almost as lost as Savill as he struggles through the morass, both personal and political, into which he has stumbled. As a period piece it is, as you would expect, first class. As a crime novel it fails to grip.