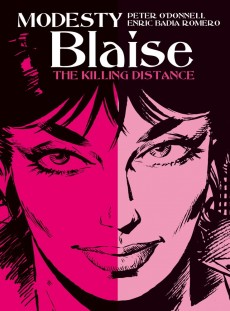 Modesty and Willie take on mercenaries, assassins and pirates in three stories by Peter O’Donnell and illustrator Enric Romero.

As a caver, I always love seeing Modesty Blaise and Willie Garvin venture underground. One of my favourite of the novels, The Silver Mistress, takes the dynamic duo deep under the Pyrenees where Modesty has to face a formidable combat master alone, with the aid of nothing more than a tin of grease.

In Guido the Jinx, the first story in this collection, Modesty and Willie are taking a six-week holiday following the historic Silk Road. They’re more than a little surprised to come across a tribe of cave men living in the hills, but nothing is quite what it seems and they are soon reunited with the all-round charlatan and egomaniac, Guido Biganzoli, who has appeared in three other stories.

The irrepressible Guido is acting as a fixer for a film crew deep in the deserts of Samarkand and, naturally, he has a favour to ask, which plunges Modesty and Willie deep into the heart of an underground river. Their escape from certain death is as inventive as ever, even though it wouldn’t win them any awards for cave conservation!

It’s their inventiveness that sets this pair apart from so many main characters. They never just pull out a gun and blast away; indeed in so many of the stories, they do all they can to avoid having to use weapons. In The Killing Distance, their inventiveness is tasked almost to breaking point when they have to save the life of old friend and spymaster, Sir Gerald Tarrant, living under the threat of assassination by an old enemy whose career he ruined. Peter O’Donnell always delighted in throwing his characters into a seemingly impossible situation and then letting them work their way out of it by any means possible, and Modesty and Willie are never better than when they’re up against seemingly insurmountable odds.

The same is very much true of the third story, The Aristo, which, although written over 20 years ago, still remains as topical as ever. Modesty and Willie run up against old enemy, Mr Wu Smith, who first appeared in I, Lucifer, and end up being rescued from the sea as their light aircraft is brought down by a bomb, forcing them to ditch in the sea, en route to Manila. They’re rescued by a container ship carrying electrical goods from Taiwan to Singapore. But nothing is ever easy for that pair, and they soon have to tangle with ruthless pirates who are quite happy to leave a massacre in their wake if challenged.

Each story is brought vividly to life by the strong and distinctive penmanship of Enric Badia Romero. Modesty’s high-cheekboned beauty acts as a lure for the unwary, while Willie is as craggily attractive as ever. The villains are villainous, the heroes are heroic and O’Donnell demonstrates time and time again why no one can touch him when it comes to imagining action scenes.