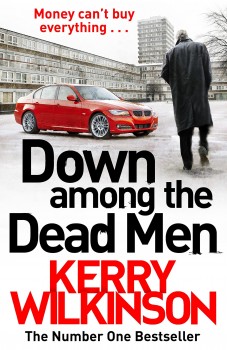 Down Among the Dead Men

Jason Green works for crime boss Harry Irwell, but when Jason’s younger brother gets into trouble, it looks like he’s on his own, despite having friends in low places.

Jason Green works for Manchester crime boss, Harry Irwell, doing a bit of this and a bit of that, as he describes it, euphemisms for all manner of dodgy dealings, including administering beatings as an integral part of delivering Harry’s various ‘messages’.

The thing is, Jason owes Harry for saving him from a mugging when he was only a kid and, more importantly, Harry pays well. Jason doesn’t want this life forever, stuck in a grotty high-rise flat with an alcoholic mother and a younger brother who just wants to scrounge Jason’s hard-earned cash. Jason has an ambition to use the money he’s saving in an off-shore account to enable him to exchange the grey skies of Manchester for the sun of Crete, where he dreams of running a bar.

Despite what he does for money, Jason is a likeable character. He does his best for his family, even though living with a mother who does nothing more than pour vodka down her throat whilst living on an endless diet of daytime TV is pretty soul-sapping. But he brings home food, drapes a blanket over his mother when she falls into a stupor, and does his best to make sure she doesn’t choke on her own vomit.

The pattern of Jason’s life starts to change when he meets two very different women: Lucy, an art student who works in the local library, who invites Jason back to her flat so she can paint him and Natalie, who offers to change Jason’s life for the better, but only at a price. One that Jason isn’t sure he can pay.

This is the first time I’ve read one of Kerry Wilkinson’s books, although my 86-year-old mother-in-law is a big fan of his Jessica Daniel series, and a standalone seemed as a good a place as any to start. The first thing that stood out for me is that he writes convincing characters. Jason makes a good protagonist, easy to sympathise with, despite his life as an itinerant enforcer and courier of dodgy goods.

He has great difficulty reading people, and never has a clue when someone is joking, possibly placing him somewhere on the Asperger’s scale. His genuine puzzlement when people make jokes around him is endearing and it’s easy to feel protective of him.

When Jason’s brother Chris goes missing, no one seems to want to help, not even Harry, who Jason has come to rely on, and the mysterious Natalie is equally dismissive. Unless Jason is prepared to dish the dirt on his boss, she’s not interested. I was unashamedly rooting for Jason as he was cut adrift, and forced to survive on his own wits.

Wilkinson writes convincingly of the seamier side of Manchester, bringing the city and its darker elements vividly to life. He writes characters you can care about, and that, for me, was the key to this book’s success.