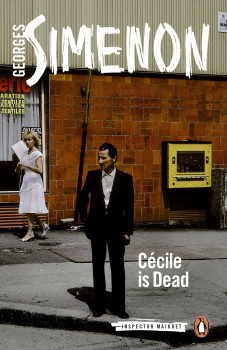 Nobody in Maigret’s office takes Cécile seriously when she insists that there is a frequent intruder in her flat.  However, when Maigret decides to pay a call on her, just to be on the safe side, he finds that her aunt, with whom she lives, has been murdered.

Maigret arrives at work one day to find Cécile waiting to see him. This is by no means the first time she has visited the office and insisted on seeing him.  Apparently, she believes that someone is surreptitiously gaining entrance to the apartment that she shares with her aunt.

Maigret has had Lucas observe the apartment on several nights but there never appeared to be a visitor. Cécile however, insists that somebody has been breaking into the apartment and moving objects from their place, without stealing anything. Maigret’s colleagues insist that this dowdy young woman, who looks older than her years, is simply an attention-seeker, but, such is her determination to see him when she comes, that Maigret himself is unconvinced of that.

On the form she had been obliged to complete in order to see him she had written: “You simply must see me. A terrible thing happened last night.” This is a particularly busy day for Maigret and she comes well down the list of people to be seen and things to be done. He assumes, however, that, even if she has to wait all day, she will do so and he is very surprised when, finally free to see her, he finds she has left.

Maigret is puzzled and a little alarmed by this, and decides to call on her but finds she is not at home. Her aunt, Juliette, however, is at home, but unable to give him any information because she is lying dead on her bed, having been strangled.  Presumably this was the “terrible thing” Cécile had wanted to tell him but that conversation will never take place because she too turns up dead – again strangled – and in a very odd place.

The plot appears to be a fairly straightforward one. Maigret learns from the disreputable, now disbarred former lawyer, Dandurand, that Juliette Boynet is the owner not only of the entire building in which she lives, but also of a number of others besides, and that she is in consequence a very wealthy woman. When her funeral is held both her own distant family and that of her deceased husband turn out in force and compete with each other to lead the cortège. There is much talk about her will and we assume that that is the reason for her death.

With Simenon, however, things are not always as they seem and, although money is involved, the connection is not immediately obvious.  It is rare that a Simenon plot is not altogether convincing, but there is a certain degree of contrivance about the circumstances of Juliette’s murder, although the element of surprise is so strong that we scarcely notice that.

However, there is always much more than mere curiosity over whodunit in every Maigret novel and this one is no exception. Cécile scarcely appears in the novel but from what we learn of her we cannot help but be very sympathetic towards a young woman deprived of love and life and forced to be a permanent skivvy to her uncaring, money-worshipping aunt.  She herself, on the other hand, although poor, is always ready to do what she can for her even more impoverished brother.

As we read the novel we carry the picture of this 28-year-old woman, cheaply dressed and looking like an old maid, sitting patiently waiting for an appointment with Maigret – a meeting that never takes place. She is such a common sight in the office that she is the butt of jokes. Even Maigret, normally so indulgent towards the poor and disadvantaged, becomes impatient with her trivial reports of an intruder who never steals anything. We extend something of the same sympathy to her brother, married to a pregnant wife and desperate to get a job, although, unlike his sister, he constantly complains about his lot. Those two apart, there isn’t an attractive character in sight and we are confronted – as frequently in Simenon’s writing – with the human race at its most selfish and uncaring.