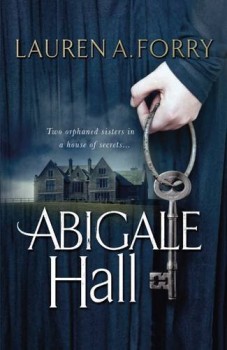 by Lauren A. Forry

Two sisters are sent away by their aunt to work at an isolated Welsh mansion. Amongst the dark and cold rooms they are surrounded by rumours of missing maids and a young bride who disappeared before her wedding.

If you ever have a chance to time travel back to 1947 - don’t. Just don’t. London is slowly regaining its strength after the war, but on every corner empty houses, bombsites, poverty, loneliness and opportunists beckon. Some people try to make a living in this tough city, others struggle with themselves and the past. And the neglected estate house set in the remote part of Wales isn’t a happy place either. It seems haunted, terrifying and suffocating, emanating an all-consuming presence of a horrendous terrible secret.

However, if you come across Abigale Hall – read it, and experience smells, noises and gloominess of the twisted world of superstitions with a lingering sense of foreboding, and the constant presence of death. Lauren A Forry has created a grim environment in her debut novel, a winner of Faber and Faber’s Creative Writing MA Prize. Part ghost tale, part detective story, it is a suspenseful and surprising read of two orphaned sisters.

Seventeen-year-old Eliza and the younger troubled Rebecca have suffered enough personal terrors during World War II. The evacuation from London to the countryside affected them in a different way, emphasising flaws and strengths of their personalities. Their mother died during the Blitz. They witnessed their father’s suicide. Clinging to the semblance of normality they are staying with their reluctant Aunt Bess in the capital. But then something awful happens and both sisters are sent away to the crumbling mansion, next to a coalmine, owned by mysterious Mr Brownawell and run by vicious, cold-hearted Mrs Pollard. They have to work as maids.

Eliza overhears tales of girls who had worked there previously and went missing, and encounters apparitions of Victoria, Mr Brownawell’s young fiancée, who had disappeared on the eve of the wedding. But is it a figment of her imagination or a real ghost? Mysterious noises and dried blood stains in rooms and on books’ pages suggest murder. Or did the girls die of natural causes like Mrs Pollard explains? Is the house going to claim two new victims?

Meanwhile rebellious Rebecca, suffering from anxiety, falls under the ruthless housekeeper’s spell, and becomes cruel beyond reason. The house, the village gossip, the rumours, the mysterious curses take the toll on sisters who seem to be slowly descending into a world of madness.

Eliza is desperate to return to London and to her boyfriend Peter who unknown to her has started a search. Scarred by war, both are full of self-doubt, and occasionally self-hate as they separately struggle against uncaring people and unhelpful circumstances. The detailed psychological portraits of these two young people carry all emotions and insecurities due to their age, but more importantly because of the difficult experiences. The reunion will shock you, and leave you wanting to read more from Forry.