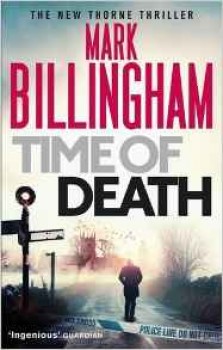 Two children are missing from Polesford and hopes of finding them alive are rapidly fading.

Polesford is a deadbeat Warwickshire town with more than its fair share of problems. It’s surrounded by floodwaters and the police are already busy stopping looting from deserted houses, so when two schoolgirls go missing, the pressure mounts, with officers drafted in from neighbouring areas and the press setting up camp.

Helen Weeks grew up in Polesford. The town doesn’t hold much in the way of good memories but when she sees the face of an old schoolfriend splashed all over the news as the wife of Stephen Bates, the man the police are questioning in connection with the abduction of the two girls, she wants to be there to support her. Boyfriend and fellow copper Tom Thorne isn’t keen on the idea, but agrees to go along as well.

Linda Bates and her two teenage children are under siege in their house, with the press outside and two rather unsympathetic family liaison officers sharing their kitchen. Helen doesn’t suffer fools gladly, and the two officers soon come in for the rough end of her tongue. Thorne is equally unimpressed by what strikes him as a somewhat desultory search for the missing girls. It’s clear the local police have given them both up for dead and have seized on some fairly flimsy evidence to support their view that Stephen Bates is guilty.

When a decomposing and partly-burned body is found by a dog-walker in a local wood, their belief in Bates’s guilt only deepens, as does their belief that the other girl is dead as well. But Thorne isn’t convinced, and he never was much good at keeping out of other people’s business.

On one level, DI Tom Thorne could be seen as little more than another stereotypical maverick copper with a dark past, but somehow he always manages to rise above the clichéd ranks of fellow murder squad detectives, possibly because of his sheer unpredictability. There’s always a feeling with Thorne that you never quite know what he’ll do next. The disapproval of his bosses has never stopped him and even a past demotion back to uniform was little more than water off a duck’s back.

In Time of Death, Thorne is at his best, doggedly following his instincts as well as examining the evidence, aided by his frequent partner in crime, Phil Hendricks. The gay, shaven-headed, tattooed pathologist with enough body-piercings to make a trip through airport security an interesting business is always good value. Hendricks promptly and successfully chats up forensic etymologist Dr Liam Southworth in the hope of finding some means of corroborating one of Thorne’s theories.

There are several candidates for the role of villain of the piece, and Billingham – as ever – did a good job of keeping me guessing. The trick is to spot the plausible red herrings, which isn’t easy. There are several unexpected twists and turns in Time of Death and, although the shifts between past tense and present tense have a tendency to irritate, that is easily balanced by a brisk pace and some very acutely-drawn characters. Thorne himself continues to develop, and Time of Death also provides more depth for Helen Weeks as she struggles with the shadows of her own past.