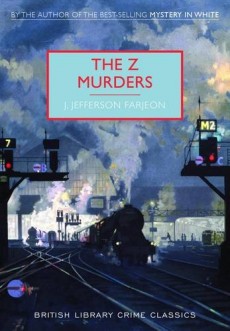 After witnessing an apparently random murder, Richard Temperley sets out to find some answers.

Richard Temperley is an accidental witness to an apparently random murder. But how random is it? And how is the beautiful young woman he notices involved in it? Temperley must juggle his chivalrous instincts with his quest for answers as the murderer strikes again and again ...

Temperley is travelling on the early train to London Euston where his attempts to sleep are frustrated by a loud-snoring fellow traveller. Temperley finds the snorer's body in a hotel lounge after the room has been recently vacated by an attractive young woman. The only clue, apart from the young woman's handbag, is a metal badge emblazoned with the letter 'z'.

Temperley decides to keep the young woman's existence a secret from the police and to unravel the mystery himself. This begins a cat and mouse chase with Temperley trying to find (and protect) the mystery girl while simultaneously dodging the police and tracking the murderer himself. He needs to be quick in this because the murderer strikes again in Bristol. This is a serial killer, but can Temperley find the killer and his motive while saving the girl?

This has to be one of the strangest murder mysteries I have ever read. Even allowing for the passage of time, it mystifies me how Farjeon was held in such regard by his contemporaries if this is a prime example of his work. Everyone almost without exception is completely stupid. Temperley, whose brain has clearly outsourced its decision-making responsibilities to another part of his anatomy, concludes that the girl, Sylvia Wynne, cannot be guilty of the murder essentially because she's pretty.

Wynne herself spends her time running away from Temperley, or telling him that he has to trust her – and then running away. Inspector James apparently feels that following Temperley is a more productive line of enquiry than, say, going round enamel badge manufacturers and seeing who has put in an order for 'z' badges recently.

Farjeon introduces us to the killer halfway through the book. This is just as well because none of the other characters show any signs of finding him. Unfortunately the psychology of serial killers is a closed book to Farjeon and his killer is straight out the Hooded Claw School of Melodramatic Villainy. The wonder isn't that he has not killed before now, but that he wasn't restrained under one of the Mental Health Acts as soon as he reached England.

If you can ignore the idiocy of the hero, the helplessness of the heroine, the incompetency of the police and the Victorian villain, there is a reasonably entertaining story here. Farjeon keeps the timescale to a couple of days and knows how to write an exciting and tense chase scene as the whole circus rockets from London to Bristol to Norfolk.

This book is from the 'Golden Age of Detective Fiction'. On this showing, some of that gold was solid brass.