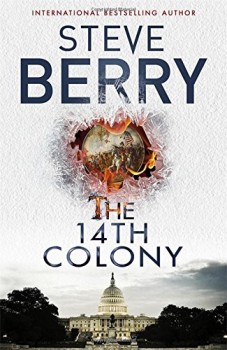 The Cold War has been over for years and Russia has lost it. However, there is one man who refuses to accept this and has plans to take a horrifying revenge on the United States.

The Prologue introduces us to two prominent figures of the 20th Century – Pope John Paul II and President Reagan. It is historically accurate that they did meet in the Vatican on June 7 1982, though the subject of their discussions is unknown.  However, it is perfectly reasonable to believe, as the author suggests, that they concerned the then Soviet Union. This novel has President Reagan seeking and gaining the support of the Pope in undermining and ultimately removing what both agreed was a tyrannical regime.

Stephanie Nelle is unhappy because she is on the point of losing her job as head of the Magellan Billet, one of the many intelligence and counterintelligence units within the US government. In addition to that, the agency itself is to be closed down when the new administration takes over the White House in a few days’ time.  One of her last acts had been to send a former agent, Cotton Malone, into Russia at the request of US President Daniels. She didn’t know the reason for this mission, though he had told her that he was doing Moscow a favour. Malone meets the man, Zorin, an old Cold War KGB officer, though not in the circumstances he had anticipated.

We learn that Zorin has never accepted the fact that the Cold War is over and that Russia lost it. Partly because he is a patriot and partly because his privileged life as a KGB officer has been taken from him, he is driven by a desire for some form of revenge against the former enemy, the United States. In order to achieve this he is quite prepared to sacrifice his life.

When she begins to see exactly what he has in mind, Stephanie realises that it is a race against time. She cannot believe that he is going to accomplish his aim but she knows that he is utterly fanatical and that no chances must be taken. Accordingly, two more of her former agents are brought into the search for Zorin – Cassiopeia Vitt, a billionairess, and Luke Daniels, the President’s nephew.

The second part of the story is told in short – sometimes too short – chapters, giving an impression of speed. Occasionally the reader can become a little confused, as when, for example, there are two firefights going on at the same time, both involving a man and a woman. On the whole, however, the narrative is gripping, even though we are always aware that the planned catastrophe can never take place. The interest lies in seeing exactly how the anti-Zorin forces are ever going to learn enough in time to be able to thwart him.

The first part of the book is altogether slower and seems at first sight rather puzzling.  Why, for example, should the reader be given what amounts to a lecture on the US constitution in so far as it concerns the change of President? The author is clearly interested in the history of the Revolutionary War, but it is not immediately obvious why it should be included in what is essentially a thriller until we begin to see a structural resemblance to The Da Vinci Code. However, Steve Berry avoids the verbosity of that novel, being always aware of what is required to keep the reader turning the page and ensuring that he provides it.