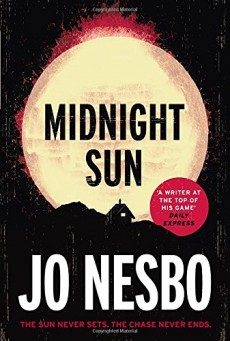 Jon Hansen is on the run after betraying Oslo’s biggest crime lord, the Fisherman. But hiding in a small town in the far north of Norway, close to the Arctic Circle, brings its own dangers, and the never-ending daylight is just one of them.

Having read eight books of the Oslo detective Harry Hole (notorious good-guy) series, and avoiding vivid descriptions of torture, I was curious to see how a different type of story works and so the standalone Midnight Sun seemed like a great choice. And it was, with a touch of macabre just like in Headhunters (think an ingenious hiding place), and an occasional dose of brutal violence. Compact, concise and very entertaining it could have been much longer but this length is actually perfect. It leaves you wanting more!

Compared to Jo Nesbø’s previous thrillers this is a fairly simple story of a man who tries to escape the consequences of a life of crime, having betrayed the Fisherman (Oslo’s biggest crime lord), and being certain that he will have to pay for his actions. Likeable and averse to violence this small-scale drug dealer Jon Hansen, calling himself Ulf, travels on the bus to Finnmark to be as far as possible from Oslo.

In the new surroundings he attempts to start again, assuming a new identity, with a gun and a huge wad of money. He wants to find sanctuary in a sleepy desolate town, home to a strict Christian sect. To start with the local shifty man Mattis points him to Lea, a new widow, who owns an old shepherd’s cabin in the wilderness. Lea offers her help, cabin and a rifle, and her ten-year-old son Knut feels really drawn to this enigmatic man from ‘down south’. Nothing exciting happens but Jon knows that the Fisherman’s henchmen are on his trail.

Sheltering in the cabin, feeling lonely with a young reindeer as the only neighbour, and with the midnight sun slowly driving him to insanity, Jon faces his past and the choices he had to make about life, love and religion. This last issue is especially uncomfortable because he is falling in love with stern, proud Lea whose father is the leader of the zealous sect, and whose life has been shaped by the brutal rape by the vicious man whom she was forced to marry when she was 18.

The question of religion is examined from different angles. Atheist Jon contemplates suicide as his situation gets more impossible, with no prospect of living a ‘normal life’. Knut tells him that he’ll burn in hell for smoking, drinking moonshine and avoiding church. And Lea most of all believes in ‘people’s capacity for goodness’ which might just bring some hope.

Nesbø has lived in this part of Norway and describes it beautifully: “A silent emptiness, a reticent relentlessness. Even the greenery of summer held a promise of harder, colder times that would try to pull you down, and which would win in the end.” Neil Smith’s skilful, natural and flowing translation carries the cinematic quality of Nesbø’s writing really well, and I would like to see Midnight Sun on the screen, sans dead animals perhaps …