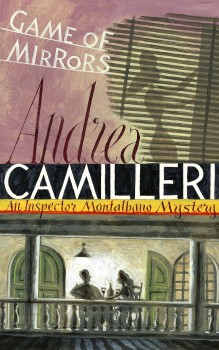 Inspector Montalbano notices his neighbour, Mrs Lombardo, looking under the bonnet of her car.  It turns out that the car has been deliberately damaged. Meanwhile a bomb has exploded in town, all giving Montalbano a lot to think about.

Inspector Montalbano lives in a sparsely populated area and doesn’t know his neighbours, the Lombardos, well, but one day on his way to work he notices the very attractive Mrs Lombardo looking under the bonnet of her car. In the apparent absence of her husband he gives Liliana a lift into town and recommends that his mechanic collects and mends the car. When it is discovered that the car has been deliberately damaged, Montalbano calls in to offer his support. Thus begins a rather strange friendship.

At work the latest crime is a bomb that has exploded in the town. Montalbano and his team begin to try to investigate, although there appears to be no obvious target for the bomb. It’s all a bit mysterious.

This is a busy, fast-moving story with a notable absence of descriptive passages. However the genius is the way in which the reader is given a clear impression of each scene through other means. What Liliana says and does and the impression she makes on Montalbano, for example, enables a clear picture to be built up of this mysterious yet attractive woman.

Montalbano’s own thoughts and feelings, the food that he eats and the way he relaxes, or not, give insight into his life. The clever ways he has of making people talk provides the reader with a clear view of his skills as an investigator and his status at work. Surprisingly, though, the fear of aging and particularly of memory loss comes through the writing. This is surprising for an English audience who are used to watching the ‘Young Montalbano’ on television.

However, this gentle way of showing the detail makes all the more shocking the graphic descriptions of some violent attacks towards the end of the book. This subtle way of manipulating the reader is to be much admired and provides a masterclass for the budding writer.

The one aspect that always disappoints with the Montalbano novels is the attempt at dialect.  For some characters it is understandably used to create an impression of being under-educated, and for these the speech is measured and acceptable. But the speech of the character Catarella just seems silly. Where does this dialect come from? Catarella is very talented with computers, but evidently has some annoying habits and uses some odd phrases when dealing with the inspector. Surely this does not imply that he is totally stupid with an almost unintelligible dialect? Whilst the author is so good at showing other characters in a subtle manner, the accent of Catarella always seems unnecessarily contrived.

Nevertheless, the story is intriguing and well written. The plots are not obvious and trying to work out and follow the various theories that are put forward about the events ensures that interest is maintained throughout. Game of Mirrors is a  very good and enjoyable read as always from this author.