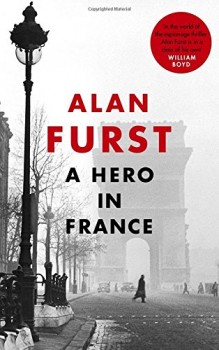 A Hero in France

Mathieu and his French Resistance colleagues must risk their lives to smuggle British airmen out of the country and back into the fray.

One line in Alan Furst’s A Hero in France particularly stuck in my mind – when someone was described as a citizen of the shadows. And that’s entirely typical of Furst – he’s the king of the arresting image.

Furst’s books are snapshots of a time – ordinary people trying to survive best they can in wartime. The emphasis is rarely on the big players such as the Britain, America or Germany – instead, France and the Balkans frequently come under his gaze. And these are not all-action thrillers; Furst knows that less is more when it comes to portraying the horrors of war.

It’s 1941 and Britain is struggling. The French Resistance are carrying out a vital role of smuggling downed airmen to safety via Spain so that they can return home and resume their duties. But it’s a dangerous occupation for the ordinary men and women in Paris – you never know who might be about to betray you.

Mathieu is the main focus of the book. I hesitate to call him a hero, as it’s a weak word in a story punctuated by cameos and acts of bravery from all manner of French people. But it’s Mathieu who leads much of the action – all done in a stark, understated manner. The book really does drive home how ordinary people refused to give in to the Nazis and quietly kept up their stubborn and courageous disobedience.

So many people pass through the pages – a dogged café owner, a vet, a butcher, a nurse, a Croatian conman, a creepy young man called the Spider, a supercilious Englishman … All are painted in with Furst’s effective brief brushstrokes. Paris itself is so real that you feel you’re sitting in a café or hurrying home to beat the nightly curfew.

A British reader may occasionally find some of the Americanisms jarring: “Say, you’ve forgotten your hat” or “she fixed herself a meal.” But it never detracts from an immaculate story which is so much more effective at getting across the horrors of war than any tale dripping with blood and guts.