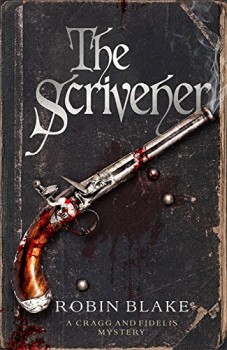 Coroner Titus Cragg leads an inquest into the death of a Preston pawnbroker, attempting to determine whether the man committed suicide or was murdered.

Preston, 1742. The town is shortly to be celebrating its Guild, a two-week festival honouring the traders, craftsmen and merchants who have a monopoly in the city. Mayor Grimshaw has been planning for this for ages, as the Guild only takes once every 20 years, and each mayor tries to outdo the last in providing entertainment for the people of the town and the surrounding area.

Unfortunately for the Mayor, he chose to invest the Guild funds with Philip Pimbo, a pawnbroker and would-be banker, so when Pimbo is found dead in his office, seemingly shot by his own hand, Grimshaw is keen to see the death recorded as anything other than suicide, as in such a case, Pimbo’s wealth will be forfeit to the Crown and so not available to reimburse the money he’d been holding for others, including the Mayor.

Preston Coroner Titus Cragg is faced with a classic locked room mystery. Pimbo was alone on the other side of a locked door, and it seems unlikely that the case is anything other than suicide, but his friend Dr Luke Fidelis is less sure, and insists on investigating further. For one thing, he wants to know what’s happened to the pawnbroker’s dog. The little spaniel was invariably at his master’s side, and in the event of suicide, Fidelis is certain that the dog would have been killed first, so the whereabouts of the animal becomes of importance.

As a schoolgirl, I had the misfortune to take part in a display of Norwegian dancing in the 1972 Guild, so when I saw that The Scrivener was set in the city where I was born and went to school, I jumped on it with alacrity and it didn’t disappoint. Robin Blake skilfully evokes the setting of my home town, with familiar street names and even more familiar pubs, which will resonate with anyone who knows the town – now a city.

Cragg and Fidelis make a good team. Cragg is steady and reliable, going about his job with determination and refusing to be browbeaten by Mayor Grimshaw’s bullying and bombast. Cragg is a man of principle and honour. He’s shocked by the grim revelations that come up as his investigation leads him to the unsavoury truth about the grim Guinea trade whereby goods from Liverpool are exchanged for slaves on the west coast of Africa. The ships then sail to the West Indies where the slaves are sold to work on the plantations. After that, the ships returning to Liverpool loaded with sugar and spices, now worth several times that of their original cargo. It’s a valuable investment for those willing to trade in human suffering and misery.

Luke Fidelis is equally principled, treating those too poor to engage his services without requiring payment, which seems somewhat at odds with his intention of having the largest doctor’s practice in Preston. Together, they delve deep into a morass of assault, brutal murder, unwise investment and insurance fraud. The solutions are equally clever and neatly exposed. Blake avoids the lengthy exposition that all too often bogs down the denouement in crime fiction and delivers a quality tale that anyone who likes historical fiction will appreciate.