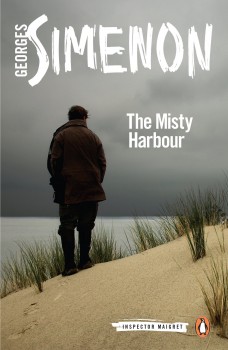 A man who does not know his own identity is picked up by Paris police. Maigret sets about trying to discover who the man is.

In The Misty Harbour, Maigret is confronted by the case of a man who has no memory of who or where he is and who has recovered from an operation following a head wound. He doesn't appear to be a down-and-out and has five thousand francs in his pocket.

The mystery of his identity at least is solved when his maid, Julie, arrives in Maigret's office, having seen his picture in the newspapers. She says that his name is Yves Joris and that he is the harbourmaster at the small port of Ouistreham, having taken up this post after 30 years at sea.

Maigret decides to go there with Joris and Julie to establish whether any crime has been committed and to find out why he disappeared from the town on September 16 and turned up in Paris six weeks later. Initially, there appears to be no reason for his departure. Joris lives a quiet life, has no known enemies and is not involved in any passionate love affairs.

When Maigret arrives it is the season for mists and he finds it virtually impossible to make his way about the town. This climatic feature acts as a kind of metaphor for Maigret's efforts to discover what happened. Whilst the ordinary townsfolk are willing to welcome him into the local tavern, it seems that anybody connected with Joris, who might possibly be able to help the investigation, is saying absolutely nothing. However, the quality above all that Maigret possesses is a stubborn persistence and he eventually begins to make some progress, assisted by his devoted sergeant Lucas whom he has summoned from Paris.

The plot is not quite as well oiled as is usual in a Maigret investigation and is rather rambling. Since he receives so little help - a point that is made perhaps rather too frequently - he finds himself having to bend the law a little in order to make any progress.  At one point he even has to resort to breaking and entering. When we do eventually discover what happened we find that once again a breakdown in human relations is to blame. As frequently with Simenon, ordinary human frailty leads to a wholly unnecessary tragedy and we find ourselves wondering whether it could not have been avoided.

This novel is quite remarkable in its sense of place and in the way it captures the nuances of everyday life in a small port. Of course, owing to its position and its canal connection with the mainland, Ouistrehan was quite important at this time and the rather complex nature of its waterways is well brought out. To the lay reader it is not always easily comprehensible but the atmosphere within which the action takes place is never anything less than totally convincing.

For those readers coming to Simenon for the first time, there are better novels than this one but it is still an absorbing read.