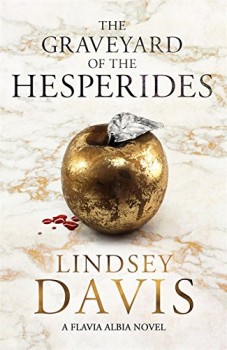 The Graveyard of the Hesperides

Flavia Albia is preparing for her wedding. But when workmen uncover six bodies in the backyard of a downmarket bar, she and husband-to-be Manlius Faustus must unravel a dark secret.

They call Rome the Eternal City – and little of its streetlife seems to have changed since informer Flavia Albia, the English-born adopted daughter of that unconventional, wisecracking investigator Marcus Didius Falco, took on her fourth and toughest case in AD89. One of my favourite cities still has neighbourhoods which make London, Manchester and Glasgow look tame. Organised crime still controls corruption, gambling, extortion, male and female prostitution. Its people still turn a blind eye and its police still occasionally show absolute indifference.

Davis captures this picture of Rome, past and present, so brilliantly readers can almost believe they are sweltering in its summer heat. I confess I am a fan. I enjoyed all 20 of her slightly dodgy father’s adventures, and now I look forward to each of those of the independent Falvia Albia – so much a modern woman in Roman dress, but hardly surprising in a time when, as history shows, a clever and determined woman could exercise massive influence.

She has finally lured her the upright plebeian aedile into her bed and with both of them discovering love’s a little lovelier the second time around, is even prepared to agree when the conventional Manlius Faustus insists on marriage. Faustus, a forward planner, has already launched a new career – taking up a family tradition as a contractor – for when his magistracy runs its term. But wedding preparations are thrown into chaos when his workmen uncover a body in the garden of a downtown and downmarket bar they are renovating.

There is a local tale of a disappearing barmaid-cum-prostitute, but that angle is quickly superseded when the diggers unearth another five skeletons all neatly buried. Flavia Albia takes on the ten-year-old cold case against the deadline of their wedding ceremony and once again plunges into Rome’s dark and brutal underworld where life is cheap and killing an easy way to solve a problem.

The superbly conceived and complicated plot, the tension of a seemingly impossible investigation and the danger into which both are plunged, is lifted and enlivened by Flavia Albia’s irreverent sense of humour and the occasional introduction of Falco’s family – all as mercurial and unpredictable as him!

Davis gets better with familiarity. This is the probably the best of the Falco stories so far, by turns brutal and brilliant, but always clever and witty with some sparkling dialogue and genuinely comic moments, offset by shrewd social comment and a surprisingly touching love story. It’s set against a totally believable and colourful background, and rattles along at breakneck pace to a spectacular climax during the wedding ceremony itself.