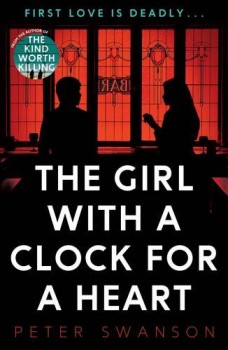 The Girl With A Clock For A Heart

The girl George Foss fell in love with in college faked suicide so she could disappear. Twenty years later she walls into a bar with a new name to tell George she is in trouble and he is the only one who can help.

George Foss is the archetypal American wimp – a nice boy from a nice, comfortable family who goes to college and meets his dream girl. After a brief but torrid affair, she disappears – and apparently commits suicide. When George tries to do the right thing and contacts her family, he discovers the girl he thought he knew was someone else who has now vanished.

Twenty years later George is in a well-paid job which bores him, living alone with his cat, and unable to form a lasting relationship with another woman. He is going nowhere and indifferent to his situation. Then his dream girl walks into a bar – with another name – and tells him she is in trouble and he is the only one who can help.

Non-confrontational, non-violent George has already had more than one harrowing experience because of their association. But memories of love and loss die hard and he quickly finds himself mixed up in a crazy world of deception, theft on a grand scale – and the target of both the police and a half-deranged and sadistic killer. Somehow he must make sense of the various tangled versions of the past and find enough courage within himself to risk everything for the woman he still loves.

Peter Swanson’s debut has received a lot of praise and there is talk of a film version. But I have to say I can’t see what the fuss is about and found the book one-dimensional and predictable with probably one double cross too many.

It’s a clever idea, well thought out and well written, though. George, the storyteller and principal character, comes across exactly as he is supposed to – as Mr Average – and his painful psychological and physical journey towards what to me was an absolutely inevitable conclusion is carefully scripted and marshalled. But Liana/Jane/Audrey, the girl/woman who has sparked all this trouble, never seems entirely real – I still have no clue as to her motivation – and the other characters play a sketchy and peripheral role. While Swanson undoubtedly has storytelling talent, overall this was a disappointment.