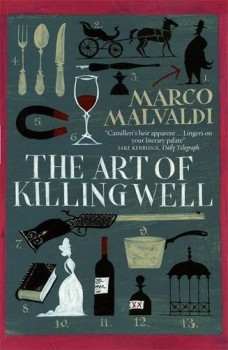 The Art of Killing Well

Cookery writer Pellegrino Artusi is invited for a weekend at a Tuscan villa. When the butler is killed and the owner shot, the celebrity chef with a liking for Sherlock Holmes helps the police discover why.

And now for something entirely different! If you’re fed up with Scandi-noir, actioned out, psycologically drained, this charming and witty throwback to a near-Christie style mystery thriller with a solid base in good Italian cooking will certainly revive your appetite.

Author Marco Malvaldi is hardly known outside his own country, but deserves far better. His clever, deliberately dated tale, set at a time when Italy was just beginning to emerge as one nation, is also a masterpiece of social comment.

Pellegrino Artusi, the original celebrity chef and cookery writer – his The Science Of Cooking and The Art Of Eating Well was the first compendium of Italian cooking and ranks with Mrs Beaton in importance – is invited for a weekend at a noble’s Tuscan villa. When the butler is murdered and the owner shot, Artusi, who has, like the author, a scientific mind and a liking for Sherlock Holmes stories, helps the local police discover both who and why.

It is the brilliant characterisation and the smooth execution of this intelligent, gentle and atmospheric story that will keep you smiling from start to finish. Malvaldi’s always tongue-in-cheek and occasionally downright sly depiction of a crumbling nobility struggling to come to terms with the changes nationhood has brought is absolutely magnificent.

The family are a larger-than-life exaggeration, but also typical. From the determined and dictatorial grandmother to her dysfunctional grandsons, one a lecher, the other a self-styled poet of dubious ability, a granddaughter trying to avoid being married off and make something of her life and a gaggle of maiden aunts, they exist only because they have for centuries. They mix only with those of their own rank. Merchants are despised. Policemen are expected to follow their every wish. Servants power their idle, cosseted world, but do not exist separately as people.

This original and cleverly told period story lacks only Poirot to stage one of his grand finishes, but the ‘little grey cells’ of the Belgian are years in the future and Malvaldi manages remarkably well in his own understated way to produce a surprising, well thought-out and realistic denouement.

I could play word games with the master chef of crime fiction cooking up a dish to earn a place at the top table, but that would be to insult a beautifully written, clever and genuine tour de force. All I will say is that this is a Michelin three-star read!

And there’s a real bonus for foodies at the end with a selection of Artusi’s original recipes. The language may be dated, the food isn’t. I have tried several, but am still working up the nerve to attempt the Gypsy Pie!