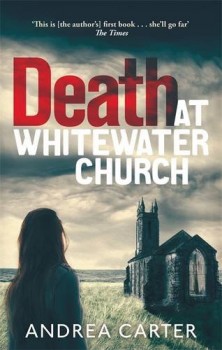 The discovery of a skeleton wrapped in a blanket in the crypt of a deconsecrated church puts rather a crimp in the sale, and leaves local solicitor Benedicta ‘Ben’ O’Keefe with some difficult skeins of local history to unravel.

Speaking as a retired conveyancing solicitor, Death at Whitewater Church was something of a busman’s holiday, but it makes such a refreshing change to read a book where the legal details are utterly authentic, with none of the badly-researched nonsense that’s all too often punted out in the name of crime fiction.

Benedicta ‘Ben’ O’Keefe is a solicitor in the depths of the wild but beautiful Inishowen peninsula in County Donegal, Ireland. She’s asked by local surveyor Paul Doherty to meet him at the site of the deconsecrated and desolate Whitewater Church and bring along a plan so he can complete a survey of the place for the estate agent as part of the sale process.

In the interests of completeness, Doherty takes a look in the crypt and discovers something that definitely shouldn’t have been there: a skeleton, wrapped in a blanket, skull resting on an old pillow. Naturally, that brings the prospective sale juddering to a halt, and gives local garda Sergeant Tom Molloy something to get his teeth into, as well as giving the inhabitants of Inishowen something to gossip about.

The hot money is on the skeleton being the body of local man, Conor Devitt who went missing six years ago when he failed to arrive at the church in time for his own wedding. That’s not something anyone is going to easily forget – or forgive, in the case of his jilted fiancée.

The good-looking but distinctly reserved Sergeant Molloy brings in some specialist help for the post-mortem, and for Ben, this brings along some very unwelcome memories from her own past, which drive something of a wedge between her and Molloy. After all, no crime book would be complete without the main character having a suitably tortured past!

But, to her credit, Carter doesn’t in any way over-play this angle, it just provides an added layer of a complexity in a book that already has more twists, turns and bumpy bits than an Irish road. There’s also a lot of depth here. Scratch the surface and you’re never far from the dark undercurrents of Ireland’s troubled past. As ever, if you want to understand the present, you first have to understand the past.

The legal details are all spot-on, but never turn into info dumps. There’s just enough to complement the plot and give a level of authenticity so often lacking. It’s not hard to spot Carter’s legal background, which she uses to good effect. A trip into the highways and byways of rural Ireland in the company of Ben O’Keefe is time very well-spent. Her wry look at the atmosphere and small town rivalries are vividly depicted, with just the right hint of Craggy Island lurking in the background, which is exactly as it should be! Father Ted isn’t referred to as a documentary rather than a comedy without good reason. No one quite shouts: Feck! Girls! Arse! Drink! but Carter’s characters are every bit as vivid.