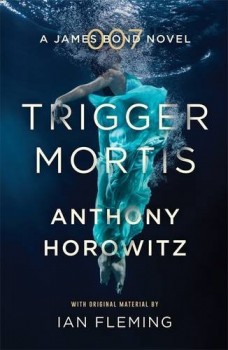 James Bond is back, this time in the capable hands of Anthony Horowitz, the latest writer to be chose by the estate of Ian Fleming to bring probably the world’s best known spy to life.

I seem to have missed Bond’s previous outing in Solo by William Boyd. Looking back, I last encountered the suave secret agent in Jeffery Deaver’s hands in Carte Blanche. Whilst I enjoyed seeing Bond in a contemporary setting in that book, it was nice to make a return to the world of vintage Bond in the 1950s. Trigger Mortis is set only a couple of week’s after the events of Bond’s possibly most famous adventure, Goldfinger.

British Intelligence is concerned that the Russians, as usual in Fleming’s books, will stop at nothing to prove a point, and in this case, the point happens to be the superiority of Russian engineering, as demonstrated by its latest model of racing car. Bond is well known for his love of fast cars, so he’s a natural choice to get close to British racing darling, Lancy Smith, and protect his back on the notoriously difficult and unpredictable track, the Nurburgring.

Naturally, wherever Bond is, beautiful women aren’t far behind, and Trigger Mortis has its fair share of them. To the annoyance of M, Bond starts the book with Pussy Galore, from Goldfinger, living in his London flat, but by the time he gets to know Logan Fairfax, the tough, competent women who’s going to teach him what he needs to know about the home of the German Grand Prix, he’s already thinking it’s time for Pussy to move on. Horowitz does a good job portraying tough women with both Fairfax and later Jeopardy Lane, a woman who handles a fast motorbike with all the flare of 007 himself, but he also falls easily back into some classic Bond stereotyping, turning the street-savvy Galore into a victim so that Bond can race to her rescue.

Trigger Mortis captures the feel of classic Bond, helped in places by the incorporation of some of Fleming’s own material, lifted from the outline of a TV series that never saw the light of day because the films took off in such a big way. As ever, Bond smokes like a chimney, drinks his favourite cocktail shaken not stirred, and is surrounded by glamorous women. There’s even a hair-raising scene played out on top of a train speeding through the tunnels under New York in classic Bond fashion as he fights against the clock to stop a cataclysmic explosion. But this incarnation of Bond occasionally displays something that’s all too often lacking in his various incarnations, a conscience, and that makes a refreshing change.

If you like the original Bond books, it’s a safe bet that you’ll like Trigger Mortis, too. Horowitz captures the flavour and feel of the originals. His Bond is definitely more Sean Connery than Daniel Craig.