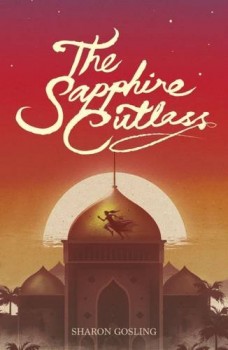 Rémy Brunel and the crew of the ruby airship travel deep into the forests and mountains of India on the trail of the mysterious Sapphire Cutlass.

Sharon Gosling’s thoroughly entertaining children’s adventures, The Diamond Thief, The Ruby Airship and The Sapphire Cutlass, took me straight back to the days when I devoured every book by the wonderful Joan Aiken as soon as I could get my hands on them.

Rémy Brunel performs on the trapeze in a travelling circus, but is also one of Europe’s most accomplished diamond thieves. In the first book, she’s thrown together with Thaddeus Rec, a police detective, and London street urchin J. Together they battle against a series of increasingly powerful megalomaniacs in a Victorian setting with rich and varied steampunk elements, including submarines, ruby-powered airships, mechanical armies and lastly a vengeful Indian goddess of almost unimaginable power.

In the final book in the series, Rémy, Thaddeus, J and young Dita, the latest to join their motley crew, travel to India in the ruby airship and join forces with their old friend Desai in an attempt to bring an end to the sinister and powerful cult of the Sapphire Cutlass. The friends part company for a while when Rémy’s quest to find the twin she was separated from at birth takes her on a different course, one where she has to keep the airship out of the hands of the British army and then deal with a clash with pirates.

Gosling’s writing is crisp but lyrical and her characters shine as brightly as the jewels that give their name to each of the books. Rémy is strong and likeable, Thaddeus is honest and determined, J is loyal and ingenious and Dita is tough and resourceful. The friendships between them deepen, as does the love between Rémy and Thaddeus, but in a series where ancient curses abound and legends stir in the mountains and forests, no course runs true, not even love.

The books are hugely engaging, each building on the strength of the one before, and The Sapphire Cutlass provides a powerful and exciting end to a series that grabbed me right from the start. This is quality children’s fiction of the very highest order. If you enjoyed the alternate history of Joan Aiken’s Georgian era, then Sharon Gosling’s inventive steampunk Victoriana is definitely one for you.