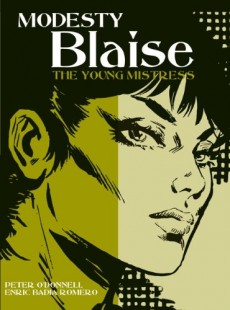 Modesty and Willie tangle with forgers, horse-thieves and a diabolical plot to kill an old friend in three more stories from Peter O’Donnell, all skilfully drawn by artist Enric Romero.

Coming back to Peter O’Donnell’s stories after a gap of a few years, I’ve been consistently struck by how topical so many of his subjects remain. Art thefts and art forgeries never seem far from the news these days, and that sort of theft was once an area that Modesty’s criminal organisation, The Network, specialised in.

The Young Mistress brings Modesty back into that world when she comes to the aid of skilled forger, Marian Hall, who’s got in a little too deep with the wrong kind of people. Luckily for her, she calls on Modesty’s occasional boyfriend Dr Giles Pennyfeather for help, just when he happens to be taking some time off in Modesty’s company. Another boyfriend, billionaire John Dall, also puts in an appearance in both this story and the next, Ivory Dancer.

Friendship is important to Modesty, and she always believes in paying her debts. She owes her life to young friend Sam who helped when she took on the Contrix mob and she offers Sam a break from home in the East End of London, accompanying Modesty and Willie to John Dall’s ranch in Kentucky where Sam can enjoy the horse-riding she’s so passionate about.

Sam has a real connection with horses, and is soon worried about Dall’s prize racehorse, Ivory Dancer, but can’t put her finger on why. When Dancer is stolen, Dall flies off the handle, wrongly blaming Sam for the security system being turned off, but Sam is determined to make amends. This story gives an always welcome glimpse of Willie Garvin’s circus skills when the pair put on a dangerous act for an old friend.

Our Friend Maude, the final story in the collection brings back one of Modesty and Willie’s close friends, spy Maude Tiller, one of Sir Gerald Tarrant’s trusted agents. Maude has been snatched and brainwashed by someone who wants Rene Vaubois, Tarrant’s French counterpart, dead, and it’s up to Modesty and Willie to foil the plot. Maude is another of O’Donnell’s strong female characters and amply demonstrates that Modesty is as capable of forming unbreakable bonds with women as she is with men.

To save Maude and foil the assassination plot, Modesty and Willie team up with one of Vaubaos’ agents, the irrepressible Henri, whose snub-nose and curly hair come to life under Enric Romero’s skilled pen. In addition, Maude Tiller’s blonde beauty provides a counterpoint to Modesty’s dark hair and high cheekbones and allows Romero to prove yet again that there’s absolutely nothing one-dimensional about any of his characters. And with O’Donnell’s storytelling, there is never a dull moment for Modesty, Willie and their cast of thousands friends.