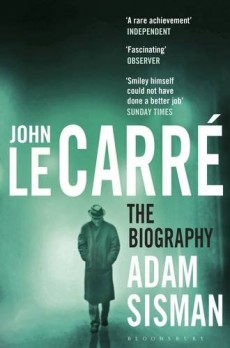 This biography of David Cornwell, better known by his penname of John le Carré, attempts to explain the link between his childhood and upbringing and his interest in the world of secret intelligence, both as a member of it and as a writer about it.

Perhaps the first thing that needs to be said is that Adam Sisman has gone to a great deal of trouble and undertaken a considerable amount of research to ensure the accuracy of his portrait of a very famous writer, John le Carré, the pen name of David Cornwell. He appears to be completely objective and although there are indications throughout that le Carré’s recollection of events is not entirely in accord with the author’s, the Cromwellian requirement for ‘warts and all’ appears to be met.

Perhaps we feel occasionally that what the author calls ‘misrememberings’ by le Carré are attempts to show events in a more flattering light. However, when he lets it be known that his brother, Tony, was born out of wedlock, whereas he had, in fact, been born ten months after his parents’ marriage, we have to wonder how such a misrepresentation could occur. Of course, it reflects badly on his father - something one suspects wouldn’t have worried le Carré - but also on his mother, whom he always treated with respect.

Anybody remotely familiar with le Carré’s novels will know that they contain a significant amount of autobiography. In particular, A Perfect Spy is very largely based upon the relationship between the author and his father, known to everybody as Ronnie. It is not surprising, therefore, that a very large proportion of the book appears to be concerned more with the father than the son.

If anything, it seems that the portrayal of Rick Pym in that novel is more generous to Ronnie Cornwell than he actually deserved. Colin Clark, son of the art historian, Kenneth Clark, described him as ‘the best con man ever’, with a well-rehearsed ability to appear completely trustworthy. Liar, thief, racist, jail bird, associate of gangsters, frequently unfaithful to his wife, and, above all, with a desire to appear important and influential, Ronnie possessed few, in any, redeeming qualities. He even stooped so low as to blackmail le Carré in later life and threaten to disclose his affair with another woman unless he received £1000. We are told that when he died le Carré felt no regret whatsoever. Of course, from the reader’s point of view, as well as being a very bad influence on his children, he is a thoroughly interesting character.

There is little attention paid to le Carré’s schooldays at Sherborne, where he seems never quite to have settled. This is understandable in that he was frequently made uncomfortably aware of the fact that his fees had not been paid. He had always been attracted to German culture and he was keen to learn the language the better to understand it – something that put him rather apart from other boys who had a bigoted dislike of things German, with the result that he appeared to be contrary for the sake of it. He must also have been embarrassed by his father’s failure to do ‘the right thing’ on his visits to the school. When he finally insisted on leaving Sherborne to go abroad it was without any regrets. The place held no good memories for him, he was enraged by the beatings he suffered and he considered the regime there  to be neo-fascist.

As at Sherborne, his time at Oxford was precarious in that he was never certain that he would be able to meet his bills. Ronnie was still an embarrassment. On one occasion, in front of le Carré and his undergraduate friends, he asked an Indian waiter if he had been too long in the sun. Most people are aware that le Carré was associated with the secret services but they might be surprised – and perhaps not altogether pleasantly – to learn that, whilst still at Oxford, he had been employed by MI5 to report on members of potentially subversive groups. The ‘warts and all’ agreement between the author and his subject must have been severely tested in this description of what many people would regard as a disreputable part of le Carré‘s Oxford career. Sisman is clearly unhappy with having to conclude that there was something of the informer – perhaps even the schoolboy ‘sneak’ – about le Carré, particularly as he appears to have taken on the role willingly and without any reward except an occasional free lunch.

It is not obvious how seriously we are to take his explanation – much later in life – for choosing to join MI5. He says that the idea of appearing to be someone dull when he was in reality someone exciting appealed very much to him. He has rarely discussed any aspect of his life at that time but what we learn from other sources suggests that he didn’t find the secret world as interesting as he had anticipated and eventually became bored with the routine. The other impression that we get is that the secret service is essentially immoral, not to mention frequently incompetent.

The author deals in detail with the novels themselves – the length of time it took to write them, the initial difficulties in publishing, screen and television rights, the success or otherwise and the critical reaction. The publication of the badly received The Naïve and Sentimental Lover immediately after the hugely successful The Spy Who Came in from the Cold indicates a concern that le Carré always had with his own writing and one that many critics shared. It is that his spy novels were not serious literature and that his efforts outside the genre were less successful, if not downright failures. This kind of distinction is rarely made these days and there are few people who would not agree that the Smiley trilogy, for example, are regarded as classic novels and not classic spy novels.

There are aspects of the man himself that are not altogether admirable – not all of which can be put down to his erratic childhood and upbringing. He did not like public criticism of his work, an example of this being the feud he carried on with Salman Rushdie. The way in which he treats his wife, Ann is at best offhand and at worst cruel. Even before they were married he would write her letters telling her of the parties he had attended and the girls he had met. Perhaps such insensitivity was only to be expected from a son of Ronnie Cornwell. When she becomes his wife he seems quite happy to leave her with the children whenever he feels like it and go on his frequent travels.

A large part of the reason for this is his desire to minimise the amount of time he spends in England in order to avoid tax. He is always very concerned with money and is quite prepared to dispense with publishers, agents and accountants if they are less than 100 per cent effective. In later years he has been prepared to be more honest and spoke openly in one interview about having been working class and about his father’s time in jail. The impression we gain, however, is that, although frequently impatient and testy, if he is a friend he is a good one.

One has to admire the way in which his later years have been concerned with good causes, philanthropy and the exposure of those aspects of English life he considers selfish and against the common good. He condemns globalisation and the corporate ethic by which shareholders are always the main concern – as exemplified by novels like The Mission Song and The Constant Gardener. These may not have the literary and artistic merit of much of his earlier work but they are powerful social statements and give the lie to the assertion that his work came to an end with the fall of the Berlin Wall. Finally, his opposition to the Iraq War, to the politicians who lied in order to persuade the English public to become involved, and to the appalling consequences it has had, are convincing proof of his patriotism and - more importantly - his humanity.