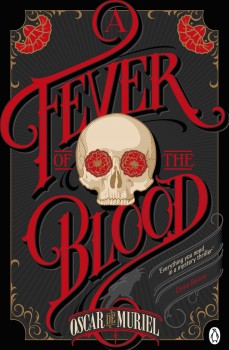 A Fever of the Blood

Mismatched detectives ‘Nine Nails’ McGray and Ian Frey, on the track of a patient who has escaped Edinburgh’s asylum where a nurse has been murdered, follow a psychopath across the border to the shadow of Pendle Hill, home of the Lancashire witches.

Mismatched Victorian detectives Inspectors Frey and ‘Nine Nails’ McGray, the sole members of the Commission for the Elucidation of Unsolved Cases Presumably Related to the Odd and Ghostly, are back in another magnificent mixture of horror, history, science and humour.

Mexican-born, multi-skilled Oscar de Muriel, also a chemistry PhD, translator and violinist, combines his esoteric skills with in-depth research into the legends and superstitions of both his homeland and adopted country to produce another compelling story.

Witches? Nonsense, I hear readers cry! But this story, like its predecessor, is set towards the end of the 19th century when belief in the supernatural was still common in rural areas and only 150 years after the last executions – in fact, the final trial under the 1735 Witchcraft Act did not take place until 1944.

Nothing has changed between the protagonists. Frey, the narrator, is the immaculately dressed, socially adept, product of a professional London family. He regards Adolphus McGray, a rough, tough, Scot, with a tragic family background, a predilection for violence and a belief in the supernatural, as little better than a barbarian. McGray thinks him another soft, la-di-dah Southerner and never misses a chance to express his views in the most basic terms! Although they have come to a spiky working relationship, the exchanges between the two are very real and often genuinely funny.

A patient has escaped escape from Edinburgh asylum after killing a nurse. The man is Lord Joel Ardglass, son of McGray’s enemy, the grasping Lady Ardglass. Before he fled, Ardglass was heard having a conversation with a girl who hasn’t spoken for five years  – McGray’s sister. The Scotsman becomes obsessed with finding Ardglass, not only for the killing, but also because he wants to know what his sister said.

The two detectives, with Frey an unwilling participant, follow a trail of bodies across the border into England where it becomes clear Ardglass may not be as mad as he appears – and is set on destroying a coven of powerful witches!

There are plenty of twists in a strong and well-sustained plot – with a subtle sub-plot on the exercise of power through manipulation – in an atmosphere of creeping horror, to keep you turning pages to a spectacular ending on Pendle Hill. This was the setting for the most famous witch trial in English history, when 12 women and men were charged with the ten murders by witchcraft. All but two were tried at Lancaster Assizes in 1612. Ten were found guilty and hung.

A Fever of the Blood is clever, occasionally frightening and superbly written. Even the supporting characters assume a life of their own, particularly Madame Katerina, a clairvoyant who makes a welcome return appearance. Winter in Edinburgh and England’s north west provides suitably chilling settings for an action-filled adventure in which not everything goes the way of the detectives. The sceptical and scientfically-minded Frey eventually manages to find a logical explanation – but even he cannot be sure of what he thought he saw and heard.

This is a great book for readers of paranormal mysteries, or even those looking for something fast-moving, horrific in parts, but with enough humour to lift it above the ordinary. It has everything you need in a mystery thriller.