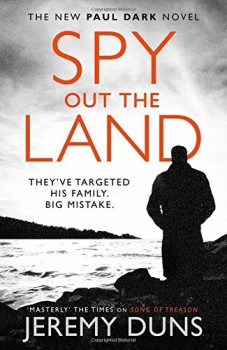 Spy Out The Land

Double agent Paul Dark hides his own past, but when his family is kidnapped, he discovers his wife has also been living a double life – and one which may hold the key to the future of war-torn Rhodesia.

One of the problems of ‘faction’ stories based on recent events is that there are still people around who not only remember them, but were also actually there. For that reason alone, Duns’ latest episode in the life of his anti-hero double agent Paul Dark, fails, both as an improbable piece of Boys’ Own rubbish or a half-decent interpretation of historical fact.

The idea behind this thickly woven tale of espionage – the ruthlessness with which the major Cold War players exploited African freedom movements and the greed and desperation of the giant companies who saw their profits threatened, is sound. But Dark is hardly a pleasant character. A British agent and Soviet mole, we are asked to believe he has escaped from the KGB’s Lubyanka Prison – as one does if you are a super-spy – before being shot and left for dead on a Baltic island. Somehow he recovers, ends up in his mother’s homeland of Sweden, meets a Zambian girl, falls in love and starts a family.

If this is not improbable enough, his wife also has a secret past as the daughter of a Rhodesian nationalist leader deeply involved in the battle for independence from the white regime of Ian Smith. When his wife and son are kidnapped to put pressure on her father, Dark begins a search against time for them, while himself becomes the subject of an international manhunt sparked by a suspicious girl analyst inside MI6. The plot fairly gallops along, straddling Europe, Russia and the Far East before reaching a totally unbelievable action climax on the railway bridge over Victoria Falls.

Duns tries to combine the styles of Forsyth and Le Carré. His writing is fluid and engaging, well detailed with plenty of colour and texture. But for an author who prides himself on historical accuracy, the characters and their roles and personalities in the key African section fail to strike true. Smith is portrayed as a weak-willed white supremacist, where in fact he fought his own party to try to achieve a gradual settlement which would lead to eventual majority rule. He was cautious, but events – and Mugabe – have proved him right!

That mental and physical giant of a man Joshua Nkomo, a warrior by breeding and inclination, would never have sat by quivering if his life and that of his colleagues was threatened. The legendary irregular soldier Lt Col Ron Reid-Daly and his Selous Scouts are foully traduced. His relationship with the government and the powerful Central Intelligence Organisation are accurately portrayed, but no one has suggested the 80+ per cent African Scouts and their leader were ever anything but loyal – and certainly the unit never operated in Europe. Even their greatest success, the cross-border raid led Captain Rob Warraker against a ZANLA guerrilla training camp on the Nyadzonya River in Mozambique is misrepresented.

The 80-odd men and vehicles were actually disguised to appear to belong to FRELIMO, the Marxist-Leninist Mozambican rebels. Morrison Nyathi, a former ZANLA commander, bluffed his way past the gate guards before the Rhodesians opened fire killing more than 1,000.

Even the huge London & Rhodesia mining and business conglomerate gets dragged into this mish-mash of conspiracy theories – including a plot to assassinate British Prime Minister Harold Wilson during a visit to Nigeria – as the template for the kernel of greed which sparks a fascistic clique reaching high into British and American intelligence.

If you read this purely as a novel, it’s smart, clever and well told, but given Dark’s past, I find it impossible to imagine him as a loving husband and father. Betrayal is far too deep within his make-up. But if you take this as a story based around the facts of the birth of Zimbabwe, you'll be fooling yourself!