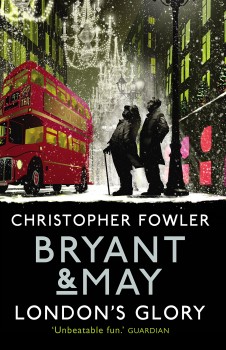 A collection of short stories recounting some of the cases of the two detectives, Bryant and May, of the Peculiar Crimes Unit, based in London, spanning the period from the start to the finish of their work together.

This is a collection of short stories featuring the two detectives Arthur Bryant and John May of The Peculiar Crimes Unit in London.  Each story is about one of the crimes solved by the detectives over the years.

Prior to the stories there is a fascinating essay about crime fiction in general, written by the author.  Included are some of his thoughts on such aspects of the genre as realism, variety, successes and difficulties, timing, loyalty and novelty, plots, importance of character, use of history and tradition, and influences of past writers. Christopher Fowler appears just so knowledgeable that this section is pure gold for any budding writer – that said plenty of secrets are still kept hidden to maintain some of the magic of the writing. However, instead of reading this at the start of the book it may have been better placed after the stories as the expectation is that the book is for the stories, rather than this essay.

And most of these stories do not disappoint. Each one is perfectly formed, drawing the reader into the situation immediately, conjuring up a world of London, developing new characters, establishing a mystery, and finding a solution, often not one that might be predicted. One criticism might be that too many of the stories are set in a cold, wet, dreary or smog-filled London. Although to be strictly fair, one of the later ones is set in sunny Turkey.

At the start of each story there is a section in italics which outlines some of the author’s thinking about it, the stimulus for the original idea, for example.  At the end of the book there is a section about some of his previously published works and finally there is a booklist, Arthur Bryant’s Secret Library.

So overall this is a very informative book that provides a master class in the writing of crime-fiction. The individual stories are well crafted and well written. However for those who just enjoy the stories for what they are, then the collection may appear rather short, and although each has a different context they do become slightly repetitive.

That aside, there are always interesting historical references: London is nearly always cold and damp, Bryant always interferes with procedural things and the cases always have an unusual solution.  It may be that the longer novel is a better vehicle for each of these stories, so that they might be developed in more depth. The stated intention of the book is to be a bit like a Christmas annual, which it achieves.