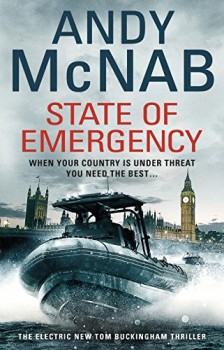 Tom Buckingham, ex-SAS, is still working undercover for MI5, as a security advisor for Vernon Rolt, head of the ex-serviceman's charity Invicta. Rolt, however, has found himself a new position – Home Secretary. Tom foils an attempt on Rolt's life, but the assassin was not an expected enemy of Rolt, it's someone from his own organisation. Tom embarks on a journey to find out what's really going on in Invicta.

With the Home Office under new control, Tom doesn't have a handler any longer, and no one in the new regime knows about him anyway, so he's on his own. He also needs to find out who the mysterious Russian benefactor linking Rolt to Tom's father is. And he comes face-to-face with a suicide bomber who once thought he was doing the right thing but ended up a pawn in a game of politics and media manipulation. UK politics and society as we know it is under direct threat, and Tom Buckingham is tested to the absolute limit in his lone bid to prevent the impending disaster.

You find yourself thinking the scenario in the book could so easily have been the outcome of the UK general election. Andy McNab continues to place his protagonist, Tom Buckingham, in a setting prime for the time. However, it's not a bounty of SNP MPs that win the election in State of Emergency, it's Buckingham's boss – Vernon Rolt. And he's been handed the position of Home Secretary. And you are incredibly grateful that, despite what you may think of the way the election actually turned out, the guards outside Buckingham Palace have not yet had to, as McNab puts it, swap their bearskins and red tunics for kevlar and live ammunition. McNab does just throw in these lovely little details that show the plausible creep towards bunker mentality in the establishment.

As well as getting more of the fantastic character Sarah Garvey, we find ourselves getting to know a new character – a young lad from Croydon. Sadly, he's in Syria with IS, and it's hard not to feel desperately sorry for him as his situation spins out of all control as the book progresses. Trust McNab to turn everything upside down.

We also find ourselves back in Cumbria with Tom. It's great to see the Lakes used as this distant place where anything can be hidden. In the setting far from London, McNab can really ramp it up.

And then there comes a point in the book where Tom starts to suffer. He does head home and let him mum patch him up, which makes for a lovely scene, but there's little comfort there as he discovers his father could be knee-deep in something Rolt has his hand in. The family ties in the book are well crafted, as usual.

I take a bizarre pleasure in reading about Tom Buckingham being hurt and tortured. It's just so well written. Hardly surprising given McNab's background, but it's difficult not to be thankful for a good read. In fact, unlike any Buckingham novel so far, you can really feel Tom unravelling in this book. His language turns a shade bluer, and he's so far out on a limb it seems impossible for him to pull it back.

This book is a good read. It's that Buckingham mix of political thriller and military methods, which keeps McNab interesting. Of course, Tom puts the puzzle together and cold-bloodedly saves the day. The epilogue ends abruptly and icily, but it all fits rather well, because that's Tom Buckingham's world.