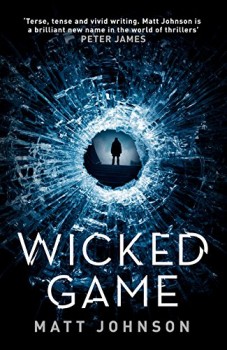 Robert Finlay is in his late 40s, and he returns to uniform policing in London. He hopes that his deeply concealed SAS secrets and traumatic experiences will never be revealed. But the past comes to haunt him in the most horrendous way when two of his former colleagues are murdered.

The beginning of Wicked Game brings to mind a chat with mates by a weary veteran soldier who has seen and done things, reflecting on his life, with a dash of bravado, some light touches, a bit of humour. But this is a mask, a mechanism to put the horrific past behind him, the emotional scars and physical memories buried (some literally) and apparently forgotten, because they are too painful to be shared, even with those closest to him.

Robert Finlay was married to the job, full of secret missions and constant danger, living on adrenaline and excitement. Now a police officer on the Royalty Protection team based in London, and on the verge of slowing down, he returns to the uniform policing to have less stressful life with his new family: small daughter Becky and attractive feisty wife Jenni.

But as soon as he starts working in notorious Stoke Newington he realises that he might have to deal with his own deeply concealed past. When a policeman is killed in a bomb blast, and then another gunned down outside his own house, Finlay has a sense of foreboding that turns into certainty. These two men were his former army colleagues from the SAS regiment. A tip-off first unsettles him, and then makes him question his life, loyalties, and previous belief that secrets will remain hidden.

The story moves at neck-breaking speed, with the endless pressure on Finlay becoming unbearable. When dealing with real and perceived danger he constantly analyses his emotions. He doesn’t know whom to trust: Bill Grahamslaw, the Anti-Terrorist Squad Commander, former boss Monaghan, his former colleagues, his friend Kevin Jones ...

However, he will stop at nothing (and the list is long) to protect his family in a fight against an unidentified ruthless enemy. Involvement in the Iranian Embassy siege, a posting to Northern Ireland in the 1980s and a long career could have triggered hate and revenge from anyone.

Matt Johnson published Wicked Game himself before Orenda Books propelled this military thriller onto the bookshelves again. His experience as a soldier and Metropolitan Police officer for 25 years brings a huge wealth of knowledge into his intense and vivid style. However, it also led to post-traumatic stress disorder (PSTD) which eventually, through therapy, crystallised as a cathartic discovery of a passion for writing.

With his first-hand real life experience Johnson has an understanding of what was going on in the minds of his friends, superiors and even terrorists. This is translated into excellent psychological portraits of the main characters. Facts mixed with fiction and unclear boundaries between both are basis for moving authentic narration and brilliant storytelling.

As the complex plot kept the momentum going the snippets of information about SAS, soldiers’ training and recent British history made me want to read more and learn more. And that’s the best I can get from a book.