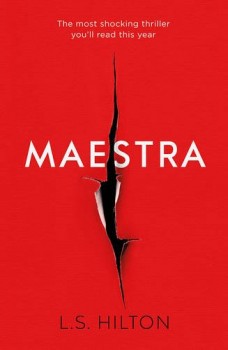 Judith Rashleigh loses her job with a London auction house when she discovers an art fraud. And then the body count starts to rise.

It’s amazing how writing smut will get you a lot of publicity … I’m not sure whether to blame Fifty Shades of Shite or the rash of dodgy female narrator books. At least this one isn’t called The Girl Who Bonked Her Way Around the Art World.

The publishers would have you believe that this is the most shocking thriller you’ll read all year. It’s probably a good job that they didn’t append ‘or your money back’ to that claim, or they’d be bankrupt by the summer!

Maestra isn’t actually irredeemably terrible, although it won’t be worrying many of the judges when the awards come around. I found it to be an extremely easy on the brain page-turner where I rolled my eyes a lot, but was intrigued to see where LS Hilton was going with her plot.

In a nutshell (ooh err, matron!), Judith Rashleigh gets sacked from her job at a London auction house when she discovers an art fraud. She’s been making money on the side in a sleazy club, so sets off to France with an old friend and their sugar daddy. Cue lots of nice scenery across Europe, and a mounting (ooh err again!) tally of bodies.

Two things set Maestra aside from your usual crime fare – some interesting information on the art scene, and some thoroughly boring ‘insert tab A into slot B’ sex scenes, which tend to be repeated ad nauseam. Coo, how naughty!

There is a very strong whiff of Highsmith and Ripley around Maestra and Judith – a girl from a very ordinary background hangs out with the toffs, and isn’t overly fussed what she does to earn money. But to compare them is an insult to Highsmith, one of the great writers in the genre, who produced a truly memorable lead character and a series of books that will stand the test of time.

And that more or less sums up Maestra – an attention-seeking attempt with a flimsy main character which will be fine on the sun loungers of Europe this summer, but is otherwise pretty forgettable.