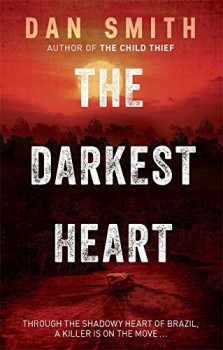 Zico is a man for whom killing has become a way of life, so the demand that he kill a nun should pose no problems. But something is telling him that the job is not as straightforward as it looks.

Zico is a product of the Rio favelas, running with a drug gang in his youth and after a family tragedy, becoming an experienced killer. He has turned his back on Rio, and ended up at Piratinga, an Amazon river town, where he scrapes a living doing casual work, with occasional jobs using his special skills for local fixer Costa.

When Costa calls him in for the job of killing Sister Dolores Beckett, though, Zico feels uneasy. For one thing, the payment offered is well above the usual rate, and for another Costa threatens that if the job is not done his pistoleiros will take revenge on Daniella, Zico’s girlfriend, and Raul, his friend who runs a decrepit old riverboat.

With little option, Zico departs for a rendezvous with Dolores at Mina dos Santos, taking passage with Raul who has a job delivering cargo to the same town. The employer is Leonardo, also travelling on the Deus e o Diabo, who Zico recognises as a man accustomed to killing. Daniella refuses to be left behind and the four, together with Raul’s dog Rocky, set off on a trip which Zico realises is bound to end badly for someone.

The book is centred on Zico’s moral dilemma, compounded by the practical difficulties he faces in extricating himself from his situation without danger to the few people he loves. It becomes apparent very quickly that Zico takes no pleasure in killing, that the lives he has taken in the past were of men with few redeeming features, and that he is eager to make a clean start. However, it seems killing Dolores is the price he needs to pay to keep his friends safe.

A further moral dimension emerges when Zico ponders on the reasons for the contract on the nun, an advocate for the rights of the indigenous natives, and the forces ranged against her – exploiters of the land for cash crops and gold, in particular the shadowy Branquino family who employ Costa. These men have no compunction in killing in their search for wealth, and the unrestricted mining at Mina dos Santos for their benefit is poisoning the land all around.

Given that his subjects are illiterate peasants, it is impressive that the author manages to give his characters sufficient life to make their plight both believable and gripping. While they are poor and ill-educated, their understanding of the eternal verities is not impaired. The action sequences are well-depicted and realistic, and the tension is built up nicely to the final chapters. If only one could sustain as much optimism about the prospects for the Amazon basin as one can for the protagonists.