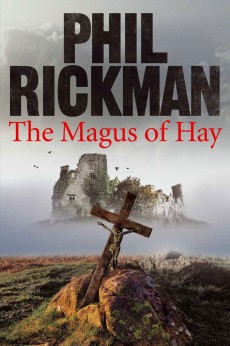 The Magus of Hay

The discovery of an old man’s body at the foot of a waterfall looks like it could have been an accident, but DI Frannie Bliss isn’t so sure, and when he sees the contents of the dead man’s home, he calls in diocesan exorcist Merrily Watkins, for a second opinion.

The arrival of a new book in Phil Rickman’s long-running series set in and around the county of Herefordshire and featuring diocesan exorcist Merrily Watkins always brings a big smile to my face, and the book immediately goes to the top of my reading pile. I’ve read and enjoyed every one of the previous book and the series is still as strong as ever.

One of the things I like most about Rickman’s series is the way the characters move in and out of the storyline, with the supporting cast from earlier books often coming very firmly to centre stage. In this case, the main focus of the book is DI Francis Bliss, known as Frannie to his friends. Bliss has only just returned to work, and frankly shouldn’t have done. He’s still suffering both mentally and physically from the effects of a savage beating he incurred as part of an operation to break up an illegal dog-fighting ring, and is only just managing to keep the knowledge of his still fragile state of health from his colleagues.

Going out to the discovery of an old man’s body at the foot of a waterfall was meant to be just a way of getting Bliss away from the painfully bright lights of the office, but instead, he ends up wondering whether the death really was an accident, or something more sinister. The contents of the dead man’s house increase Bliss’s suspicions and he calls on Merrily Watkins in her capacity as the Diocese of Hereford’s official advisor on all things paranormal.

The Magus of Hay also sees the return of Robin and Betty Thorogood, doing their best to move on from the accident that robbed Robin of much of his mobility. They’re opening a bookshop in Hay-on-Way and are at the bottom of a very steep learning curve. The town of Hay is practically a character in its own right, as anyone who has walked around its plethora of bookshops will know, and Rickman weaves fact and fiction as skilfully as ever, with real-life characters such as Richard Booth, self-styled King of Hay, sharing the pages with the likes of the excellently-drawn Jeeter Kapoor, dealing in cricketing books and Ms Sylvia Merchant, who is still holding doors open for her close friend, Ms Nott, despite the fact that her former assistant is dead.

But in many ways, the star of the show is the delightfully foul-mouthed Miss White, still excoriating everyone around her with her sharp tongue, and fencing verbally with Merrily in the finest of fine fettles.

The supernatural elements are as subtly understated yet chilling as ever, interwoven with Frannie Bliss’s desperate search for missing police officer Tamsin Winterson. Merrily’s daughter Jane is off-stage for this book, as is Merrily’s boyfriend, Lol Robinson, presumably because their creator was already juggling what at times seems like a cast of thousands, but Frannie Bliss and Miss White very much make up for that.

It’s hard to know where to stop when talking about this book. There’s so much going on at all levels and I ended up turning the pages faster and faster, even though I wanted to stretch it out as long as possible, knowing that I’ll have another long year to wait before I can immerse myself in the shadowy lands on the border between England and Wales where two worlds have a distinct tendency to collide in more ways than one.

Rickman is one of the strongest and most stylish voices in this genre, bringing people and places to life in a way that few can better. No mater where you start reading in this series, I guarantee you’ll come back for more.